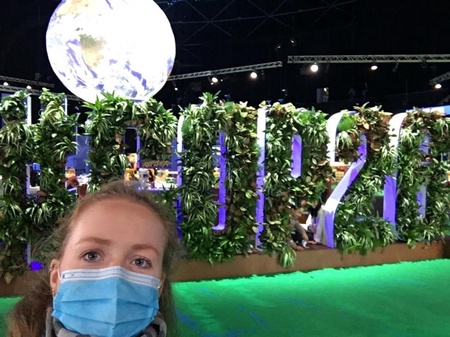 All views expressed in this article are those of the author.

COP26 was an astounding event, amplified entirely by the fact that we have just spent the last 18 months shut away inside. The number of people, the variety of sessions, the breadth of knowledge shared, and the volume of ideas were reverberating around my head for some time after leaving Glasgow, and I struggled to wind down after the influx of noise, colours, timings, and voices that had plagued my senses for a week. On reflection, I am unable to contemplate COP26 in its entirety, not least because I only witnessed a minute part of it. From what I did see, I must admit that it felt adrift from reality. Whilst the belief that we can save the planet is one to hold on to, I feel there needs to be a rethink on the most productive way to collaborate. Yes, it’s important that every voice is heard, and a conference seems the best way to ensure inclusion, but the scale of COP26 was such that it appeared impossible to know where to start and how to prioritise items on the agenda.

Loath to appear all doom and gloom, I will say that there was hope to be found. A flicker of positivity was sparked in me every time I heard from specific people about the work they are doing in their local community and the creativity exhibited in finding solutions. It is true that the human race possesses incredible ingenuity, and comfort for me came in the shape of those who have made strides to better support the livelihood of their neighbours. As a result I have a new found appreciation for entrepreneurship, and think it’s incredibly important to nurture this key skill. If attending COP26 taught me anything it was the value of inspired individuals driven to make a change.

In reflecting on my time in in the city, I found myself considering COP26 with two distinct perspectives. When thinking about the conference as a whole my head hums with white noise and it’s impossible to find a defining voice or trailblazing idea among the melee. I attended several side events throughout the week, run by individual nations, organisations and other parties present. Some were more constructive than others. Most ran for an average of an hour and had 5 speakers, which seemed a good set up. However, rather than having a considered discussion and allowing for the generation of new ideas, each session followed a pattern of predetermined pitches given by various company representatives finished off with a futile attempt to promote audience participation by opening the floor to a meagre number of questions. Sessions began on time, but speakers were so pressed to deliver what they had to say in the shortest amount of time possible that it was like each pavilion had entered a competition of who could facilitate the most panel discussions and cover the widest range of topics in two weeks.

The hectic nature of the Q&A panel discussions was mirrored in the corridors at COP. People were scrambling from one place to another, frantically typing on laptops and queuing endlessly for coffee. It begged the question of what they were all doing there. As an observer myself, I understand the irony of commenting on the presence of delegates, but I wasn’t there to add anything so why have so many of us in attendance? The volume of traffic in the hallways only increased the feeling of there being too many cooks in a kitchen tasked with feeding the 7 billion. This, I think, is the crux of the challenge. COP26 as a whole, for me at least, was a bit too big, with a bit too much going on, leaving a bit too much room for details to be skipped over in the hurry to move on to the next session. With no clear structure or advice given, I felt COP26 consisted mainly of empty arguments and an individual fight to sound more important than the person who spoke before you.

In considering COP26 from an opposing angle, I need to zoom in on the detail but the picture becomes much more positive. What felt most affirming were the sessions I attended which showcased genuine initiatives to combat climate change from around the world. Prevalent in each was the importance of thinking locally and working at a community level to impact the lives of those with whom you live side by side. One session entitled Engaging citizens in urban climate action for just transition programmes that are inclusive showcased case studies from Israel, Scotland, Italy, Belgium and Germany where they had done just that. Within each of these sessions too was a lesson for us all. The representative from Ghent, Belgium talked about the importance of climate frontrunners being social frontrunners and explained the work they are doing to fight energy poverty. A representative from the Scottish Government talked about the Glasgow Open Space Strategy, stressing the importance of planning that works for the people, bringing cities to life by bringing life to cities. These are all examples from the global north, where finance to support such initiatives is easier to come by. However, in a session run by the International Fund for Agricultural Development on climate change responses through green jobs, I heard from young people in Africa about the work they are doing to support their local communities, providing shared equipment and facilities for waste management, for example. There was talk, too, of mentoring programmes and networking opportunities to encourage and support others thinking of making a difference.

The value of new ideas and creative solutions developed by young people was present at many sessions I attended, but there wasn’t a huge amount of advice given as to how to get started. The International Labour Organisation talked about their green jobs programme which aims to support member states to bring employment strategies into climate change policies. A representative from VISA stated that there is a surplus of talent and a surplus of capital to support that talent, they just need to find each other. Unfortunately, none of the speakers at this event were able to shed light on how to match up talent with funding. However, as a careers adviser I may have the answer. We often promote initiatives aimed at supporting young entrepreneurs, both financially and logistically. After a quick search on our social media pages, I have identified five opportunities for young people to share their business ideas, receive mentorship and win funding to take their business idea from concept to reality.

Currently open for application is the Young Designer Award from the Scottish Design Exchange. There are two categories in the 2022 competition, the traditional Young Designer Award and the new Eco Design Award. Both come with a cash prize of £1000 and a year of in-kind support. Opening in January is the Deutsche Bank Award for Creative Entrepreneurs, which aims to enable and celebrate talented 18-30 year olds driven to make positive social impact through their creative enterprise. It boasts a £60,000 prize fund and £100,000 worth of business support. Open for expressions of interest is the Converge Impact Challenge for sustainable business ideas with the potential for significant and long term social or environmental impact. The top prize is £20,000 with £14,920 of in-kind business support and the runner up prize is £10,000 with £8,280 of in-kind business support. Always available is the TechX Ideas Club, a community where you can develop concepts, validate ideas, hear from inspirational speakers, network and launch new clear energy businesses. If you’re a student or graduate at the University of Aberdeen and you’re thinking of starting your own business, whether it has a sustainable agenda or not, come and chat to us at the Careers and Employability Service.

If you’re a student or graduate at the University of Aberdeen and you’re thinking of starting your own business, whether it has a sustainable agenda or not, come and chat to us at the Careers and Employability Service, or check out our webpage dedicated to enterprise and entrepreneurship.

Published by Research, University of Aberdeen