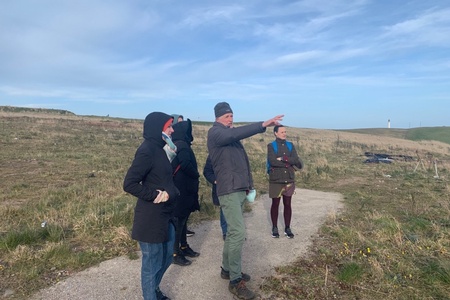 Achieving climate goals is impossible without significant transformation of our energy systems in a way that reduces reliance on fossil fuels and increases the share of low-carbon energy in the form of renewables and other options, such as nuclear energy.

The challenges are very pertinent in Aberdeen, which was affected by the downturn in the oil and gas industry in the recent years. The challenges for workers and the wider community are significant and not sufficiently understood, let alone addressed. At the same time, the location of the proposed Energy Transition Zone in the city is opposed by a local group, striving to keep green spaces available for the community.

The aim of these efforts is to find a way to distribute the burden and opportunities more fairly in the context of fossil fuels phase-out and renewable energy deployment.

In March 2022, I led a workshop on ‘Just Transition in Scotland and the Arctic’ funded by the Scottish Government’s Arctic Connections Fund. The project had a comparative angle considering some similarities and lessons learned.

In the Arctic, challenges presented by low-carbon energy projects can be amplified due to remoteness, importance of sites and habitats for indigenous local communities, and increased impacts of climate change. For example, development of wind energy projects on Sámi lands, despite opposition, have led to adverse impacts on reindeer husbandry and multiple court challenges.

During the first part of the workshop, scholars from Scotland, Iceland, Greenland, Norway, Finland and Canada presented their research looking at various aspects of just transition in their jurisdictions. Researchers took an interdisciplinary approach to the concept of just transition and discussed the challenges of operationalising a well-meaning but vague concept.

It was important to go beyond academic discussions however, to engage with the community and hear about their challenges and opinions on how researchers can be helpful. The project participants thus met with a wider stakeholder group to discuss problems of just transition in Aberdeen. They were joined by the local community group Friends of St Fittick’s Park, the head of the offshore workers union, and a Just Transition campaigner from Friends of the Earth Scotland.

On the second day of the workshop, the group travelled to Newburgh to tour the National Decommissioning Centre and learn about the work the University of Aberdeen is doing in partnership with the government and industry partners.

Project researchers also travelled to Torry where the activists from the Friends of St Fittick’s Park group provided a tour around the park and the surrounding areas, engaging in critical discussions about their worries on the Energy Transition Zone project being potentially constructed to the detriment of access to local green spaces.

This project has helped build long-lasting academic collaborations but it has also helped us build more ties with the third sector in the city, ensuring that our academic work contributes to the achievement of social justice and a just transition, for both those employed in the energy sector and for local communities, here in Aberdeen.