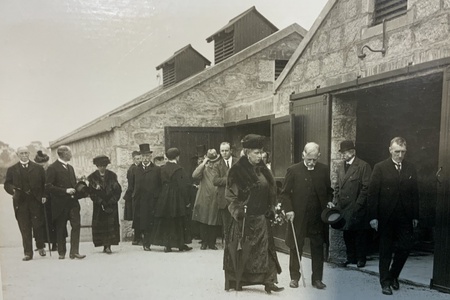 Dr David Watts, a Social scientist and historian based in the Rowett Institute, explores the story of the man behind the name of the Institute and how his generous gift a century ago has supported ground-breaking nutritional research for 100 years.

Although most accounts date the founding of the Rowett Institute to 1913, its official centenary is actually 2022. It was on September 12th 1922 that Queen Mary toured the new Institute buildings, near Bucksburn about 10 km (6¼ miles) north-west of Aberdeen, declared them open and planted a commemorative tree.

This occasion was made possible by the generosity of John Quiller Rowett. In 1920, he donated £20,000 (more than £900,000 at today’s prices), which ‘unlocked’ matched funding from the Government, and enabled the purchase of land and the building of a stand-alone research institute. In recognition of his gift, it was named the Rowett Research institute. That recognition endures. The name and work of the Rowett Institute were retained when it became part of the University of Aberdeen in 2008. Today, portraits of John Quiller Rowett and John Boyd Orr, the Institute’s founding director, preside over the reception area of the Institute’s 21st century home on the University’s Foresterhill campus.

Recent research into the Rowett Institute’s history reveals how these two remarkable men were brought together. John Boyd Orr, having studied medicine and practised briefly as doctor, was awarded a two-year scholarship in physiology at the University of Glasgow. His supervisor, Edwin Provan Cathcart, recommended Boyd Orr for a post in Aberdeen, conducting research into animal nutrition. Funding for this research had been secured in 1913 by a joint committee of the University of Aberdeen and The North of Scotland College of Agriculture. This funding, along with Boyd Orr’s decision to take the job, provided the nucleus around which the Rowett Research Institute formed.

Research was interrupted in the autumn of 1914 by the outbreak of war, in which Boyd Orr served with distinction as a medical officer. On returning to Aberdeen in 1919, Boyd Orr recommended to the joint committee that the scope of its planned nutritional research should be expanded. The committee agreed and Boyd Orr was appointed to direct the expansion. At this time, revolutionary advances in nutrition research – such as the identification of vitamins and of their important role, along with that of certain minerals, in bodily development and health – were being driven by research in biochemistry. It was considered vital, therefore, that a leading biochemist should be recruited to undertake research in and lead a biochemical department. The person appointed was Robert Henry Aders Plimmer.

Plimmer played an important, though now largely forgotten, role in the creation of the Rowett Institute. He and Rowett had attended Dulwich College and remained close, Plimmer becoming a director of Rowett, Leakey & Company in 1909. Rowett became a wine and spirit merchant and it was through this and other companies that he made a substantial fortune. Indeed, his grandson, Dr Jan Chojecki, reports that Rowett was one of the major suppliers of rum to the British armed forces during World War One.

It is this link with Plimmer that resulted in Boyd Orr meeting Rowett when he visited Aberdeen in 1920. Rowett was, as Boyd Orr reported, keen to devote a large part of his fortune to work that would benefit the country. This altruism, coupled with Rowett’s interest in agricultural improvement, motivated him to fund the institute that bears his name.

Sadly, John Quiller Rowett did not live to see the development of the research and reputation of the Institute he helped to found. Their extent can be indicated by the fact that three Nobel laurates have worked at the Rowett Institute: John James Rickard Macleod; John Boyd Orr; and Richard Laurence Millington Synge.

Rowett’s gift helped to enable and encourage the research of these and the many other talented people who have worked at the Institute. Thus, on the centenary of the official opening of the Rowett Institute, which owes its existence to this generous and disinterested patron of science, we can look forward to the next century of ground-breaking nutritional research.