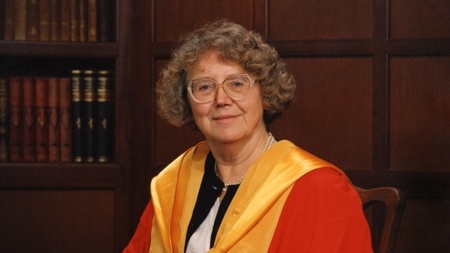 An academic who taught for more than three decades at the University of Aberdeen will be remembered through a new lecture series which gets underway at the May Festival.

Dr Joan MacCormack, who died in July 2012, joined the English Department in 1964 was a well-known figure at the University, retiring in 1996 but continuing her association with the institution for many more years as a Research Fellow.

Dr MacCormack taught hundreds of students over her 32 years, including the radio presenter James Naughtie, and was a driving force in creating a new form of integrated study.

In the 1980s she worked tirelessly to establish the UK’s first degree in cultural history – despite a backdrop of swingeing cuts to University funding – which combined literature with other disciplines, such as history, philosophy, anthropology, and the history of art, to provide a more rounded understanding of the way in which modern society has developed.

Her widower Geoffrey MacCormack, who also taught for many years at the University and who she married in 2011, said the lecture series was a fitting tribute to her memory.

“Joan and I spent our careers in the University of Aberdeen, greatly enjoying our time there teaching and learning. It therefore seemed appropriate that on her death a memorial to her life and work should take the form of a visiting lectureship in which scholars from different disciplines might further explore and develop wide ranging cultural issues. This kind of intellectual inquiry was very dear to her heart”.

The first lecture will be delivered on May 10 as part of the University’s May Festival, and will then continue on an annual basis.

Joan herself saw cultural history as 'an exploration of different modes of feeling and perception, of debating problems and asking questions' and the lecture series will continue this approach and be a lasting legacy to her memory" Geoffrey MacCormack

For the inaugural event Professor Peter Mandler, President of the Royal Historical Society and lecturer at Cambridge University, will consider how the Victorians were not only great ‘preservers’ but also great destroyers with their roads and railways and great cities were built on the rubble of medieval and Renaissance towns.

Geoffrey added: “Joan was a dynamic teacher who made a deep impression on students in both English and cultural history.

“It took huge drive and determination, and the support of many of her colleagues, to get the course up and running and it was an achievement that meant a lot to her.

“It came to attract many gifted students, provided a more comprehensive approach to the study of the diversity of cultural and social conditions at particular periods in the past than had perhaps been possible in more orthodox courses focused on particular disciplines.

“Joan herself saw cultural history as ‘an exploration of different modes of feeling and perception, of debating problems and asking questions’ and the lecture series will continue this approach and be a lasting legacy to her memory.”

The event will take place on Saturday May 10 from 4pm to 5pm in the King’s College Conference Centre, University of Aberdeen. It is free of charge but booking is required at http://www.abdn.ac.uk/mayfestival/events/5091/ or by calling 01224 641 122.