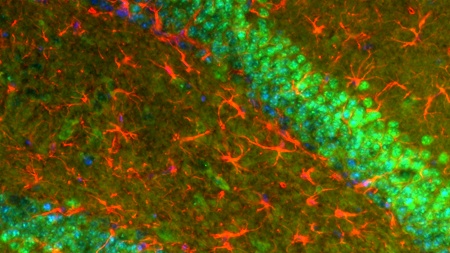 Scientists have discovered a link between a largely unstudied gene and schizophrenia.


They also found a link between the same gene and bipolar disorder, depression and autism.

The University of Aberdeen-led research - published in the Journal of Cell Science - set out to look for genes that might be important for schizophrenia.

During analysis of five major patient cohorts, scientists picked out the poorly-understood gene ULK4 which has previously been associated with hypertension but never before with mental health disorders.

They discovered that a mutation of the gene ULK4 was found far more frequently in patients with schizophrenia.

Researchers also found mutation of ULK4 in some people with bipolar disorder, depression and autism.

Schizophrenia is a severe psychiatric disorder affecting about 1 percent of the population. Genetics are estimated to be between 60 and 80 percent responsible for the condition, but very few specific susceptibility genes for schizophrenia have been firmly confirmed in humans." Dr Bing Lang, Research Fellow at the University of Aberdeen

First author Dr Bing Lang, Research Fellow at the University of Aberdeen, said: “Schizophrenia is a severe psychiatric disorder affecting about 1% of the population. Genetics are estimated to be between 60 and 80% responsible for the condition, but very few specific susceptibility genes for schizophrenia have been firmly confirmed in humans.

“However our results suggest that mutation of the gene UKL4 can be a rare genetic risk factor for schizophrenia as well as other psychiatric disorders.”

The researchers found evidence that ULK4 regulates many important signalling pathways within nerve cells involved in schizophrenia and stress.

They also discovered that mutation of the gene reduced communication between brain cells.

Professor Colin McCaig, one of the researchers and Head of the University’s School of Medical Sciences, added: “This is an important discovery of a gene involved in major mental health disorders which affects basic nerve cell growth and nerve to nerve communication. We expect it will form another important piece of the jigsaw that will produce a fuller understanding of what goes wrong in the brain in conditions such as schizophrenia.”

Dr Lang added: “We are very excited by our findings. We still need to do much more work to understand the mechanisms underlying the role of UKL4 in schizophrenia in the hope that this may lead to the discovery of new drug targets for a condition that deprives some sufferers of the ability to lead normal, independent lives.”