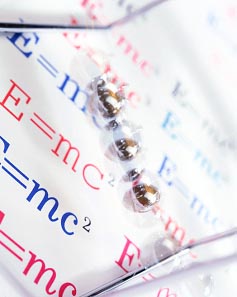 Almost 100 years ago Albert Einstein said ‘God does not play dice’ - referring to his belief that randomness was not fundamental to nature.

A free event in Aberdeen on Wednesday (February 17) will look at his statement and explain why one of the greatest scientists of our time questioned the foundations of quantum physics.

The science behind the unpredictability of the world around us will be explored in a talk by Professor Miles Padgett, a physicist from the University of Glasgow.

The event – which takes place at Waterstone’s Union Bridge branch at 7pm – is part of the University of Aberdeen’s Café Scientifique City series which aims to encourage debate around hot topics in science.

Professor Padgett will explain the workings of quantum mechanics – an area of science initiated by Einstein but one which he had major issues with – and how it tells us that the universe is not predetermined.

Professor Padgett said: “Quantum mechanics is one of the most successful theories ever produced and underpins many of today’s technologies and consumer electronics.

“Einstein was responsible for fuelling the birth of quantum mechanics in the 1900s.  But he always had major issues with certain aspects of his theory – specifically how it relates to predictability.

“Quantum mechanics tells us that if you were to conduct the same experiment twice the outcome would never be exactly the same.

“This is down to a law called the Heisenberg's Uncertainty Principle which determines that certain pairs of measurements of an object – such as position and momentum, and time and energy – can never be made at the same time.

“My talk will explore this principle and why it tells us that nothing in the universe is predetermined – everything is random.”

Professor Padgett’s talk is the second event in the new Café Scientifique City series hosted by the University’s Public Engagement with Science Unit and taking place once a month in the Costa Coffee area of Waterstone’s.

Other topics set to be covered in the months ahead include:

Café Scientifique City is free to attend, open to all and advance registration is not required for the events.

The University has launched two additional strands of Café Scientifique events this year.

Café Scientifique Shire brings debates in science to Banchory’s Woodend Barn and Café Med shines a spotlight on key health issues at the Suttie Centre for Teaching and Learning in Healthcare on the institution’s Foresterhill campus.

For information on all of the Café Scientifique events visit: www.abdn.ac.uk/science/cafescience/ or contact Dr Ken Skeldon Head of the University of Aberdeen’s Public Engagement with Science Unit by email at k.skeldon@abdn.ac.uk .

Café Scientifique is supported by a science engagement grant from the Scottish Government.