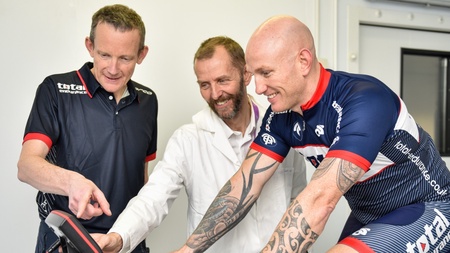 An ex-special forces soldier has visited the University of Aberdeen to continue his intensive training schedule for a potentially record-breaking challenge.

Dean Stott was invited by Dr Derek Ball, Head of Sports Science at The University to use the state-of-the-art environmental chamber used by scientists to examine the effects of thermal stress on physiological function.  The chamber, one of only two in the country simulates various environments across a range of temperatures from 5-45°C and up to 80% humidity.

Dean will begin his gruelling Pan American Highway Challenge in on January 31 2018, during which he plans to cycle from Argentina to North Alaska along the longest stretch of road in the world spanning some 14000 miles.  Dean hopes to raise one million pounds for the Heads Together campaign, a mental health awareness charity championed by Prince Harry and The Duke and Duchess of Cambridge.

Dean served alongside Harry in the army, and the pair have remained friends ever since.  Dean described how the Prince asked him to consider raising funds for Heads Together with this latest endeavour:

“I called Harry and told him about the challenge. He asked if I could do it for Heads Together and its grown arms and legs ever since.”

We wish Dean all the best and hope that he reaches his fund-raising target, which I'm sure will be of an enormous help to the many beneficiaries of such a worthy charity. " Dr Derek Stott

Dean exercised in the environment chamber, which was adjusted to replicate the conditions likely to be experienced in the temperate regions of his challenge. Dean’s physiological reactions to these simulated environments will allow his back-up team to plan a suitable hydration strategy based on the conditions he will experience. When he visited the chamber, Dean cycled for 2 hours at a temperature of 30 degrees and 55% humidity, and during this time he lost an incredible 3 litres of sweat.

Dr Derek Ball, Head of Sports Science said: “We are delighted to welcome Dean to the University to make use of our facilities and we wish Dean the very best of luck on this incredibly ambitious and gruelling challenge.  We will be following his experience closely and along with his team at Total Endurance we will be monitoring Dean’s progress and condition during the challenge.

We wish Dean all the best and hope that he reaches his fund-raising target, which I’m sure will be of an enormous help to the many beneficiaries of such a worthy charity. “

Dean has been coached for his challenge by Aberdeen based cycling and triathlon coaching group, Total Endurance