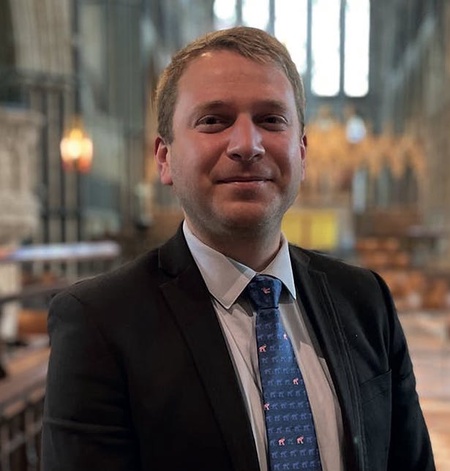 Former music student of the University of Aberdeen Music Department appointed as Director of Music at Wakefield Cathedral.

Wakefield Cathedral have appointed Ed Jones as the new Director of Music, joining the cathedral from September 2021. He is the sixth person to hold this post, dating from 1888, when the church was raised to Cathedral status for the formation of the Diocese.

Ed Jones comes from Aberdeen where a counter-tenor inspired him to join a cathedral choir, and ultimately pursue a career in cathedral music. Initially a ‘cellist, he started learning the organ during university, and played at St Andrew’s Cathedral in Aberdeen while completing his studies. He studied initially with Prof. A. Morrisson and Dr. R. B. Williams MBE. In 2018, Ed became a Fellow of the Royal College of Organists.

Ed graduated with a Bachelor of Music degree with First Class Honours from the University of Aberdeen in 2011 and then finished his studies for a PhD in Musical Composition at the University of Aberdeen in 2015 with Professor P. Mealor and Dr. P. Cooke. Recent works include various motets, a mass setting for ATB and organ, and the odd psalm chant.

Ed is currently based at Worcester Cathedral where he directs the cathedral’s Voluntary Choir of boys and adults, and is the principal accompanist of the Cathedral Choir when the girls are singing. He still sings alto on occasion, deputising in the Cathedral Choir, and is involved with other ensembles in the area

After scholarship years in Blackburn and Exeter cathedrals and a year as Associate Organist in Bradford Cathedral, Ed is looking forward to returning to Yorkshire. Besides his musical life, Ed is a keen runner, has an interest in motor cars, and enjoys a good curry.

Speaking on his appointment at Wakefield Cathedral, Ed said: “I am absolutely delighted to be joining the cathedral and working in such a vibrant department, continuing the great work of the choir and my predecessors. Wakefield Cathedral is such an exciting place, and Helen and I cannot wait to become part of the community.”

A welcome message from Dean Simon

"I am absolutely delighted that Ed will be joining us as our next Director of Music. He is a highly accomplished musician and was the unanimous choice of the appointing panel.

"Ed will bring to Wakefield his experience of working in a number of cathedral contexts, and with his appointment we can look forward with confidence as the music department moves into a new era."