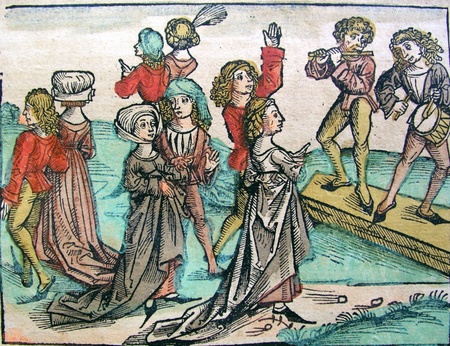 For sixty magical minutes, the audience of 'Celebrate Chez Schedel' on Saturday, 25 May, were transported with all their senses to the fifteenth century.

Dr Frauke Jürgensen, University of Aberdeen’s Music Department senior lecturer, not only devised what was a cornucopia of delights, but was also our mistress of ceremonies, in flagstone-skimming velvet and cold-defying thin leather slippers, our genial guide to the period, harpsichord player, singer, dancer and chef.  She conjured a celebration in 1466 AD by Hartmann Schedel, a documented resident of the influential German city of Nuremberg (Nürnberg in German), marking his final year at Padua university. For her Mayfest visitors, the event used celebratory songs and menus and bills from this period and was set in the atmospheric, intimate and apposite fifteenth century St Mary's Chapel of St Nicholas Kirk.

The Germans have a word for it – Gesamtkunstwerk, a total work of art.

We entered the cobwebbed door, a door in the heart of Aberdeen passed unnoticed by hundreds of people every week, and were enclosed by low, vaulted ceilings and exquisite wooden panels where, as city records show, those who had been accused of committing witchcraft were held in the witch hunts of the late 1500s. Dr Jürgensen’s magic was entirely benign and utterly engrossing.

First, we learned about Hartmann and his contemporaries, the role of university then, and what the carousing students enjoyed, such as the wines they would drink and the volume they would consume in one evening – nearly two litres each – the stylish pointed shoes they wore and the subjects they studied.

Hartmann collected popular tunes from England, France and Italy and Dr Jürgensen treated us to selections from this, playing the harpsichord, singing unaccompanied – her soprano voice ringing in the chapel – and also with Lewis Thorn and Sebastian Lim-Seet, two of her students. The songs, in German and Latin, often featured lovelorn men and also covered a table blessing and a comic drinking song, complete with hiccups. We learned that although Hartmann was enthusiastic in his many scholastic and cultural activities, he fell short on music notation skills, such as in the “Gedenck daran”, where one voice was several bars shorter than the other two. A widely published musicologist specialising in performance practice, author and music historian, Dr Jürgensen adjusted these slip-ups for us so that we could enjoy what would have been heard at his party. She also showed us a detailed colour image of musical notation, as well as other illustrative documents from the period on her lap top (the projector system had failed), by taking it to each section of the audience.

Hidden from view up to this point were culinary interpretations from “Küchenmeisterei” of 1485, the first printed cookery book published in Nuremberg. While we were provided with apple juice in lieu of the historical lakes of wine, Dr Jürgensen and her friend Tara Power, a gifted baker and cook, must have slaved for hours to interpret these ancient recipes and reproduce the festive food.

Revealed on trestle tables there was a whole pike cooked three ways – baked, poached and jellied, and fried – and reassembled, with its tooth-filled head glittering in edible silver and its tail in gold. It was surrounding by stuffed eel (Dr Jürgensen told us about the instructions given at the time about eel stuffing – a feat which would have required the dexterity of a magician), crab tartlets with pear, mock venison roast (essentially a loose, moist, peppery fruit cake) for the times in the church calendar when meat was forbidden, three types of boiled meatballs, all packed with fruit and spices, roasted pork loin, three sauces, and for pudding Lebkuchen (chewy biscuits which could only be made in Nuremberg, perhaps one of the earliest examples of a food with what we now call having Protection of Geographical Indications  (PGI) status, indeed the European Commission formally awarded the Nürnberger Lebkuchen PGI status in 1996). The final sweetmeat was the Schedel Marzipan Library – in front of a tiny marzipan model of the scholar Hartmann Schedel himself, there was an array of tiny, detailed books made of marzipan – I ate Pliny, Ovid and Plato.