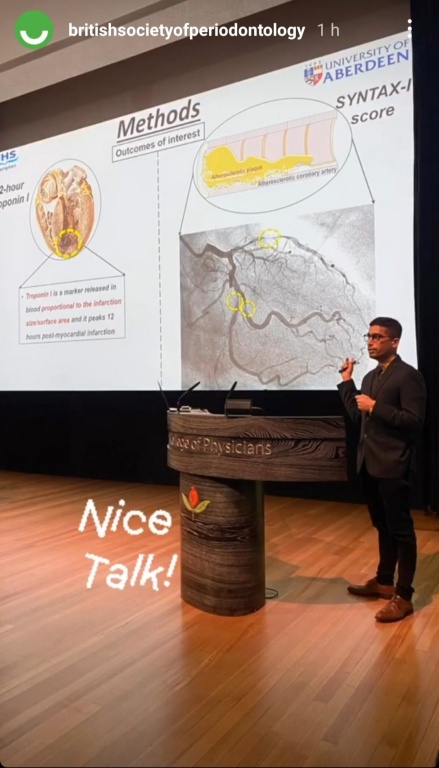 Congratulations to Chaitanya Joshi who this weekend won the prestigious Sir Wilfred Fish Prize of The British Society of Periodontology and Implant Dentistry.

The Sir Wilfred Fish Research Prize, instituted in 1970, is awarded annually by the British Society of Periodontology and Implant Dentistry, with the object of encouraging researchers in the early stages of their career. The Prize takes the form of a cash award of £1,000.

Chaitanya commented "I would like to thank Professor Dawson and Dr Hijazi for their valuable inputs, which enhanced my presentation drastically. I would also like to extend my gratitude towards the British Society of Periodontology for providing me with an esteemed platform to present my doctoral research work in front of distinguished national and international periodontists. The presentation was met with positive feedback and enthusiasm. I feel humbled and honoured to receive one of the oldest and the most prestigious national honours in the field of periodontology- the Sir Wilfred Fish research Award, instituted in 1970 and given annually by the BSP."

Chaitanya's PhD project explored periodontitis as a risk factor of myocardial infarction and whether severity of periodontitis relates to the increased severity of the underlying coronary disease burden.  Read more about the project at: From bleeding gums to coronary arteries! PhD Success for Chaitanya Joshi | News | Institute of Dentistry | The University of Aberdeen (abdn.ac.uk)