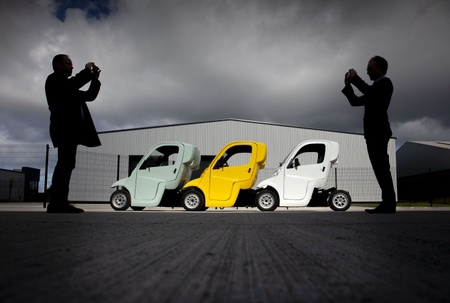 Dr Richard Mounce from the University’s Centre for Transport Research gives an overview of the ESPRIT stackable cars project after it featured as a topic of discussion on The Grand Tour.

In a recent episode of The Grand Tour, (Series 3 Episode 10) Jeremy Clarkson, Richard Hammond and James May had a light-hearted discussion about the University’s involvement in the ESPRIT project, which built and demonstrated lightweight stackable electric vehicles for one-way car-sharing as a means to reduce congestion, noise and air pollution in city centres. Even though the project team was pleased that the project was discussed on the show, there seemed to be some confusion regarding the concept and, as a result, the value of one-way car-sharing was somewhat overlooked.

Many of the problems we face on our roads today stem from a combination of personal car ownership and use, along with poor quality and usage of public transport networks. ESPRIT seeks to tackle these problems by facilitating non-polluting one-way trips, which will in some cases link up with public transport. The one-way element of ESPRIT frees up the cars for use by other people and means that the cars do not need parking spaces.

Taken together, the system has the potential to improve city centre living by reducing congestion, noise and air pollution, while providing greater energy efficiency.  Successful demonstrations have already taken place in Scotland, France and Spain, and the project coordinators CEA (Commissariat à l’Energie Atomique, based in Grenoble) are looking to bring the concept to an industrial phase with the prospect of a full-scale demonstration in Lyon on the horizon. Perhaps at some stage the Grand Tour team might see for themselves the benefits of this innovative system but in the meantime, we hope this explanation helps to demystify a system that has the potential to revolutionise travel and make our city centres greener.