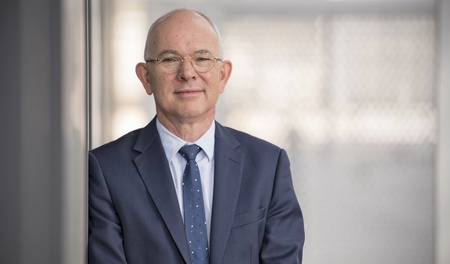 When I was attending King Street primary school - just half a mile from the University of Aberdeen’s King’s College - I could never have imagined that a time would come when I would take up the position I am so fortunate to hold today. I may have been vaguely aware that a University education was something to aspire to, but like my fellow working class friends at primary school I had little idea what that meant.

Fast forward a few years and I was lucky enough to find out for myself when I embarked on an undergraduate degree in politics and economics on this very campus, after passing the ‘eleven plus’ and finishing my sixth year at the Grammar.  It was a very happy time that of course involved studies, a little bit of student activism and great fun at the old Students’ Union watching live music on a Friday evening while having a pint or two. Even then money was a bit tight for students, so I had a part-time job to help make ends meet.

Almost four decades on, after returning to my home city and the University - this time to lead it – I was delighted to learn that we have been named Scottish University of the Year 2019 by The Times and Sunday Times. This year’s league table saw us rise 14 places from 40th to 26th place in The Times and Sunday Times’ rankings. I have heard some say that we Aberdonians tend to hide our light under a bushel – so what greater accolade for our hard working staff and students who must take great credit for this superb recognition. Our friends, partners, donors, alumni - to name but a few of our supporters and collaborators – also play a pivotal role in our success.

Coming in the same year that the University was presented with the Queen’s Anniversary Prize – the highest honour given to a UK academic institution – for our research that is informing government policy and transforming healthcare around the world, it really is a reason to celebrate this ancient institution and the local, national and global role it plays.

We will be looking to build on those relationships by forging even closer links with our civic and political leaders, with industry, with further education colleges, and with local schools - which I’m particularly looking forward to going out to visit as part of our efforts to widen access to ensure University education is open to all. Inclusiveness, for students and staff, alongside internationalisation and ensuring we are interdisciplinary, are at the heart of our future direction of travel.

It struck me upon my return to the Granite City that five centuries may have passed since the University came to be, but its founding principles remain as strong today as they did in 1495.

We owe our existence to one of Aberdeen’s most famous residents Bishop Elphinstone – the Bishop of Aberdeen – who founded King’s College, which was to become the University of Aberdeen: Scotland’s third oldest university, and one of the forty oldest universities in the world.  His ambition was “to found a university, which would be open to all and dedicated to the pursuit of truth in the service of others” - and that vision underpins all that we do.

One of the biggest changes in the University while I’ve been away has been the wonderful growth in the number of European students and staff.  This builds on our tradition of being an ancient European – as well as Scottish and then British – University.  The vagaries of UK politics mean that one of our greatest achievements looks set to turn, as a result of Brexit, into our biggest challenge.  It is crucial that we are in a position to recruit the best staff and students from across the world, so we are determined to find ways to maintain and support our highly valued community of European staff and students. Our internationalism is also reflected in our recruitment to Aberdeen of students from around 120countries across the world and the recent establishment of our campus in Qatar.  Our wider world view has remained a constant and today our research in areas such as health and energy is changing the lives of patients, countering the obesity epidemic, meeting global food challenges and tackling climate change.

The University continues to innovate when it comes to providing the lawyers, teachers, doctors and many other professionals that are key to our society. For those already in the workplace, we are also extending our online offering to provide ‘on demand’ learning.

A pedigree stretching back five centuries also means the University has helped shape the cultural landscape not only of the north-east but of Scotland, the UK and beyond. It is clear to see this remains a key tenet of University life and I look forward to enjoying the extensive contribution our staff and students make to the Arts in its broadest sense. I am looking forward to a strong contribution, with our partners at RGU, to the cultural and tourism strategies of our local authorities and other important organisations such as Opportunity North East and Visit Aberdeenshire.

It is a privilege to be back in Aberdeen and to be working for the University in this role.  We have some really exciting times ahead - as an integral and valued part of the community and the economy in which we sit and serve.

This article first appeared in the Press and Journal on September 25, 2018.