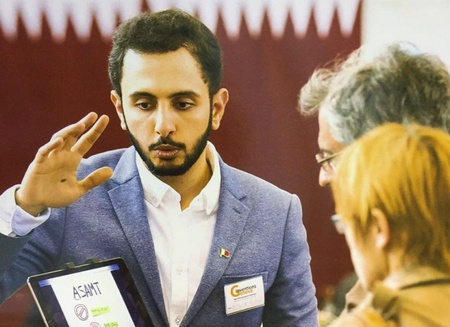 A University of Aberdeen student is working with the Qatari Government to develop a new traffic lights system that aims to significantly reduce traffic build-up and associated CO2 emissions.

Hitmi Al-Hitmi won a Gold Medal in the Environment Category of the 40th International Exhibition of Inventions for his system, which he developed while studying towards a Masters in Marketing Management.

The exhibition, which was held in Geneva earlier this year, is one of the biggest events of its type in the world.

Following his success in the competition, Hitmi was approached by the Qatari Government to trial the system, which aims to achieve the optimum time for traffic lights in order to reduce traffic build-up and CO2 emissions, while reducing the chances of an accident.

Hitmi, who graduates this month, said: “The system works by using a combination of formulas and algorithms that I developed, which is applied to the operation of the copper sensor wires and silicon nanophotonic chips that are used in the operation of traffic lights worldwide.

“I tested my method against a traffic light operated by a leading traffic solutions provider, and the results went way beyond my expectations, with nearly a 40% reduction in traffic build-up and a CO2 saving of 470kg per traffic light cycle.

Hitmi said the inspiration for the idea came from his belief that it is unrealistic to expect the majority of people to stop using their cars for environmental reasons.

"I wanted to find a simple, alternative traffic solution that helps the environment but does not require the levels of investment, maintenance or energy that may discourage poorer countries from using it,” he added.

“I am currently in discussions with the Qatari Government and a number of other countries who are interested using the system, and while it will need to undergo more trials I am confident that it has the potential to be the most efficient traffic lights system anywhere in the world.”

A video explaining Hitmi’s system is available to view here