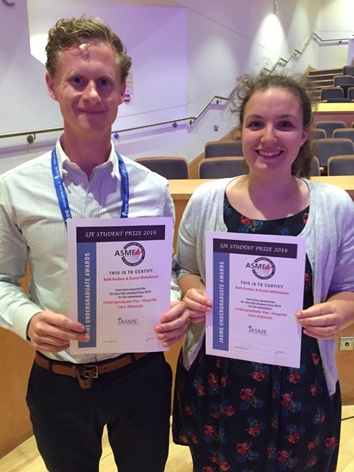 Ruth Gratton and Daniel Whitehouse picked up the Sir John Ellis Prize, an established and highly regarded national prize awarded by the Association for the Study of Medical Education (ASME) for new student work on a medical education topic.

The fifth year students’ winning paper described work they undertook in a Medical Education summer teaching development project last summer on Undergraduate Pre-hospital Care Manuals.  The work was undertaken in the Highland Centre for Medical Education in Inverness under the supervision of Prof John Duncan with support from Drs Michael Gale and Luke Regan.

The manuals are already in use for both their fellow students and tutors who co-ordinate the course in Inverness.

Ruth and Daniel presented their paper on Friday July 8 at the Annual Scientific Meeting in Belfast in July and were inundated with requests for more information on their work.