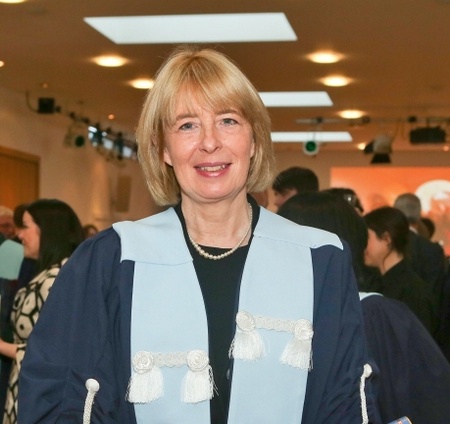 Britain's oldest surgical Royal College has awarded one of their highest honours to the University of Aberdeen's Emeritus Professor Rhona Flin.

Professor Flin is one of only a handful of non-medically qualified professionals to be granted the award normally reserved for surgeons.

The Fellowship Ad Hominem from the Royal College of Surgeons of Edinburgh was bestowed for Professor Flin’s studies into human behaviour in safety-critical settings – for example, how to help surgeons manage communication and decision making during surgery.  However, Professor Flin has applied her expertise to a variety of high-stress situations, such as the factors which contributed to the Deepwater Horizon explosion and oil spill in 2010.

Currently an Emeritus Professor of Psychology at the University, Professor Flin started her career as a psychologist after graduating from the University of Aberdeen in 1977.  During  her illustrious career, Professor Flin has authored almost 150 publications, gained two academic chairs and has been responsible for managing research grants of close to £5M for sponsors  including NATO, , the US Army, Civil Aviation Authority, the Nuclear Industry, NASA, US Navy, Cabinet Office and many more.

Professor Flin’s research has informed a ‘pilot-style’ behaviour rating system used by surgeons in operating theatre as well as by anaesthetists, scrub nurses and even trialled in ward rounds. This looks at the surgeon’s non-technical skills, such as decision making and teamwork. These systems are now being incorporated into training and assessment for operating theatre staff in the UK, and around the world including the US, Australia and Japan.

Professor Flin, who has been Professor of Applied Psychology at the University for 18 years  said:

“It's a great honour as a non-medic to be awarded this Fellowship from the College.

It's a great honour as a non-medic to be awarded this Fellowship from the College." Professor Rhona Flin

“I've always worked in applied psychology, which is practical rather than theoretical, and to have the opportunity to collaborate with the UK's leading surgeons to reduce operating theatre risk has been an honour which is only surpassed by being granted this Fellowship.

“Deepwater Horizon’s catastrophic blowout which resulted in death, injury and one of the largest environmental disasters in history revealed a whole set of failures that had to do with human factors – cognitive and social skills that complement technical expertise. What is the relevance of this oil industry accident to surgery? I have worked in psychological research in both sectors and there are striking similarities between an operating theatre team and a drilling rig crew – both are hazardous domains requiring similar non-technical skills.”

Professor John Duncan OBE, Vice President of the College, a consultant general and vascular surgeon who put Rhona forward for the award said:  “As surgeons we work in a high-risk sector.  That risk can minimal but it is never zero, surgeons are as human as their patients.  It is only by understanding how risks occur, that we can work to prevent them.

“While not a surgeon, Rhona is an expert in the human factors which are associated with risk in high-pressure situations.  She has brought her expertise to our workplace, the operating theatre and beyond, helping us understand how we can improve safety for our patients.”