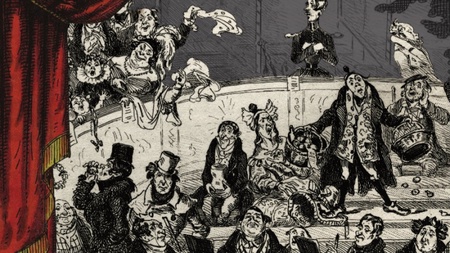 The work of Charles Dickens will be brought to life in Aberdeen by the best-selling author Ian Rankin, broadcaster James Naughtie and the writer's own great-great-grandson, professional actor Gerald Dickens.

They are among the many highlights of the 110th International Conference of the Dickens Fellowship which will be hosted for the first time at the University of Aberdeen from July 20 to 24.

The University is also home to the exhibition An Audience with Charles Dickens where first editions of all 15 of the writer’s novels are on display at the Sir Duncan Rice Library. It has already attracted more than 5,000 visitors and conference organiser Dr Paul Schlicke, an honorary lecturer at the University of Aberdeen, says it is testament to the continuing popularity of the great Victorian novelist.

“Dickens remains as popular today as he was in his writing heyday more than 150 years ago,” says Dr Schlicke.

“His work has influenced some of the best writers of the current generation and we are delighted to be able to welcome Ian Rankin and James Naughtie who will discuss Dickens’s ninth novel, Bleak House, and its influence on his crime fiction.

“When asked about his interest in Dickens, Rankin explained that Bleak House was one of the first crime novels he read and showed him that you can use the tricks of the whodunnit to engage the reader while critiquing and challenging the whole of society from top to bottom.”

“Bleak House is considered by many to be Charles Dickens’s masterpiece and is especially notable for the character of Inspector Bucket - one of the first detectives in English fiction. Bucket is determined and ruthless in pursuit of the criminal, and yet ultimately likeable - not unlike Rankin’s own Inspector Rebus.”

The In Conversation event, on Saturday July 23, which is open to non-delegates, promises to be an intriguing exploration of plots, mystery and atmosphere. It runs from 1.15-2.15pm and tickets can be purchased at www.abdn.ac.uk/events/9123

Dickens remains as popular today as he was in his writing heyday more than 150 years ago. His work has influenced some of the best writers of the current generation and we are delighted to be able to welcome Ian Rankin and James Naughtie" Dr Paul Schlicke

But there will be much more than a discussion of the murky, criminal underworld in the works of Dickens during conference week. With ‘Conviviality’ as the event’s overarching theme, the opening reception at Elphinstone Hall will be followed by dinner and a magician in keeping with Dickens’ own love of conjuring tricks.

Over the four days of the conference delegates will hear from a host of Dickens experts and enthusiasts, including Dr Jeremy Parrott, whose paper, Dickens and Company, will focus on his discovery in 2015 of a 20-volume set of Dickens’s periodical, All The Year Round, complete with pencil annotations from the period. It was described in the ensuing social media frenzy as ‘the literary find of the century’.

Dr Schlicke’s will give a lecture celebrating Dickens’s most convivial of characters, Dick Swiveller from The Old Curiosity Shop, and his wholehearted endorsement of what the Victorians referred to as a “song and supper club” - a kind of precursor to the music hall, with its offer of food, drink and musical entertainment.

As well as talks and lectures, tours and the exhibition, delegates and non-delegates can see a special showing of Michael Steele’s film Novel Performances by Dickens, at the Belmont Cinema, on the writer’s reading tours and his visits to Aberdeen’s Music Hall in 1858 and 1866. The film will be part of a double bill with the Ealing comedy Whisky Galore, based on the novel by Compton Mackenzie, first Scottish president of the Dickens Fellowship.

To round off proceedings, the conference audience will be entertained by professional actor Gerald Dickens, the great-great-grandson of Charles Dickens and past president of the Dickens Fellowship (2005-2007). Following in his famous relative’s footsteps by giving one-man recitations, Gerald Dickens will perform A Child’s Journey with Dickens, a reminiscence piece by American children’s writer Kate Douglas Wiggin.

Tickets for Ian Rankin in Conversation with James Naughtie, on Saturday 23 July, 1.15-2.15pm, can be purchased at: www.abdn.ac.uk/events/9123

The exhibition, An Audience with Charles Dickens, at The Sir Duncan Rice Library, is FREE and open to the public Monday-Friday, 10am-5pm, and Saturdays 10am-4.30pm, until 14 August. www.abdn.ac.uk/events/8856/

Exhibition: An Audience with Charles Dickens