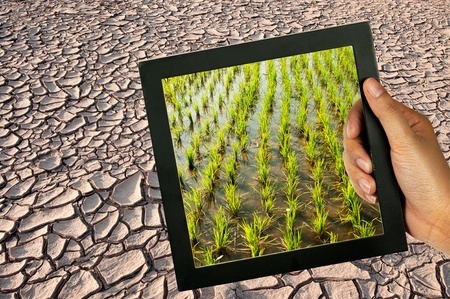 A collaboration involving the University of Aberdeen and the James Hutton Institute has been awarded approximately £450K to carry out two research projects into building resilience to drought in Ethiopia and the interaction between organic resource use and food, energy and water.

The two projects are funded by the NERC-DFID El Niňo programme and the Economic and Social Research Council (ESRC) Nexus Network and bring together a team from the University of Aberdeen, the James Hutton Institute, the Southern Agricultural Research Institute and Hawassa University carrying out research in Awassa, in Southern Ethiopia.

The BREAD project, funded by the NERC-DFID El Niňo programme and led by Professor Jo Smith from the University of Aberdeen, on “Building Resilience in Ethiopia’s Awassa region to Drought (BREAD)” aims to understand the impact of the last year’s drought in Southern Ethiopia on communities, individuals and natural resources and find ways of building resilience to drought so that communities and individuals are more prepared for the next El Niňo event.

One of the resilience building measures to be considered is better use of organic resources to improve soils. This will be supported by the work generated by a second project the team will carry out, IPORE, which is funded by ESRC and the Nexus Network.

The IPORE project, which is led by Professor Euan Phimister from the University of Aberdeen on “Improving Organic Resource use in rural Ethiopia” aims to increase understanding of the interactions between food, energy and water, associated with organic resource use.

This collaboration brings together world leading expertise in natural sciences, social sciences, economics and systems modelling from Scotland and Ethiopia to provide a unique approach to an issue that has been of global concern for many years." Professor Jo Smith

Professor Smith said: “The NERC–DFID El Niňo programme provides an important opportunity to help agricultural communities in Ethiopia to be better prepared for the next drought, while the ESRC Nexus programme will ensure that recommended resilience building measures and use of organic resources provide best access to food, water and energy.

“This collaboration brings together world leading expertise in natural sciences, social sciences, economics and systems modelling from Scotland and Ethiopia to provide a unique approach to an issue that has been of global concern for many years.”

Dr Anja Byg from the James Hutton Institute said: “The BREAD project is a timely and important opportunity to study the impacts of the 2015 El Niño event which caused widespread drought and crop failure in Ethiopia. Events such as these are likely to become worse in the future and it is therefore key to work with Ethiopian researchers and stakeholders to identify potential mechanisms which can help farmers in Ethiopia to become better equipped to cope with such events.”

The Nexus Network is a three-year initiative to foster debate, innovative research and practical collaborations across the linked ‘nexus’ domains of food, energy, water and the environment. Participation in the network is open to researchers from all disciplines, and to decision makers in government, business and civil society.

The Economic and Social Research Council (ESRC) is the UK’s largest funder of research on the social and economic questions facing us today. It supports the development and training of the UK’s future social scientists and also funds major studies that provide the infrastructure for research. ESRC-funded research informs policymakers and practitioners and helps make businesses, voluntary bodies and other organisations more effective. The ESRC also works collaboratively with six other UK research councils and Innovate UK to fund cross-disciplinary research and innovation addressing major societal challenges. The ESRC is an independent organisation, established by Royal Charter in 1965, and funded mainly by the Government.

NERC is the largest funder of environmental science in the UK. We invest £330m in cutting-edge research, training and knowledge transfer in the environmental sciences. Our scientists study and monitor the whole planet, from pole to pole, and from the deep Earth and oceans to the edge of space. We address and respond to critical issues such as environmental hazards, resource security and environmental change. Through collaboration with other science disciplines, with UK business and with policy-makers, we make sure our knowledge and skills support sustainable economic growth and public wellbeing - reducing risks to health, infrastructure, supply chains and our changing environment.