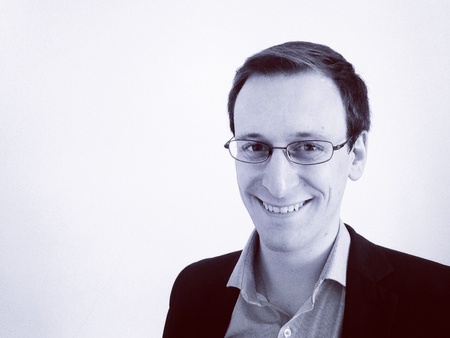 A University of Aberdeen composer and PhD student has been commissioned to write a substantial choral work to be performed by the BBC Singers at a popular multi-arts festival.

Thomas LaVoy was asked to produce a new piece for the John Armitage Memorial (JAM) to premiere at the JAM on the Marsh Festival in Romney, Kent, on July 8. The performance will also be recorded and broadcast on BBC Radio 3.

His work O Great Beyond is a setting of three verses from The Gardener, a collection of poetryby the great Bengali poet and polymath Rabindranath Tagore (1861 – 1941).

The commission follows a successful debut for LaVoy’s work at New York’s Carnegie Hall in February.

Thomas LaVoy is one of the most exciting of a new generation of composers of choral music and I am delighted that his talent has been recognised by this commission." Professor Paul Mealor

He said: “This is a very high honour and I am very pleased to be given this opportunity. The John Armitage Memorial is extremely influential in promoting the work of new composers so I am delighted to have been selected for this commission. It will be the highlight of my career so far.”

JAM on the Marsh will also feature the UK premiere of To Seek Where Shadows Are, a new work by the University’s Professor Paul Mealor, whose music has received world-wide acclaim.

A commission by the John Armitage Memorial played a central role in propelling his own music onto the world stage. He composed Now Sleeps the Crimson Petal for JAM which he was asked to adapt for the wedding of the Duke and Duchess of Cambridge where it was performed under the title Ubi Caritas.

Professor Mealor said: “Thomas LaVoy is one of the most exciting of a new generation of composers of choral music and I am delighted that his talent has been recognised by this commission.

“This is a wonderful opportunity and I know from personal experience how influential being asked to write for a music organisation of the calibre of the John Armitage Memorial can be in showcasing your work to a global audience.

“It will be a memorable experience for Thomas to hear his composition brought to life by the talented BBC Singers at what is set to be a fantastic JAM on the Marsh festival.”

The commission is one of a number of exciting opportunities for LaVoy over the summer period. Next month his work will be recorded by The Same Stream Choir in Philadelphia under the baton of conductor James Jordan.

LaVoy added: “My work will constitute a significant portion of the first full length recording by this outstanding choir.

“Many of the pieces slated for recording have been written as part of my PhD and inspired by my time at the University of Aberdeen.

Following this he will be taking up a week-long residency in the United States to work with a university choir as they present the US premiere of his newest piece, The Heart Burns.