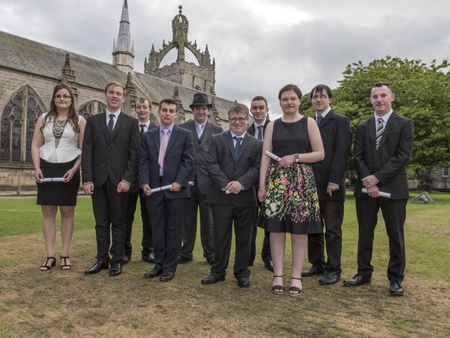 A project which aims to increase the number of people with learning disabilities securing employment held its third annual graduation ceremony at the University of Aberdeen last week (Friday, July 1).

The third cohort of interns taking part in Project SEARCH, a collaborative project between the University, North East Scotland College and Inspire, celebrated their achievements with a special ceremony.

The one-year programme sees 12 Project SEARCH Interns, who are all registered students with North East Scotland College, spending a month in a classroom environment before embarking on a rotation of three work placements in various roles and departments within the University.

The three Aberdeen partners were initially selected to carry out the project in Session 2013/14 by the Scottish Consortium for Learning Disability (SCLD) which oversees the initiative in Scotland.  The programme is also supported by Aberdeen City Council and Aberdeenshire Council who have funded some of the programme’s resources.

All of the Interns who graduated from the first year of the programme in July 2014 are now working in a variety of organisations across the Grampian area and, despite the challenging local economic environment, seven of last year’s graduates are now in employment.  Three of the current graduates have already secured employment, with a further two moving into temporary summer positions, following the ceremony.

Professor Jeremy Kilburn, Senior Vice Principal, hosted the ceremony and said: “Project SEARCH is an inspiring initiative and I am delighted to have been able to share our Interns’ success with them at the graduation ceremony.  The ongoing involvement of our local business community in the programme has been instrumental to our achievements and I am thrilled that our previous Interns have been able to sustain their employment and are making such positive contributions to their organisations.  Our local employment market continues to be challenging and so I am particularly delighted that some of our Interns who graduated today will be moving directly into work.  I look forward to sharing in the continuing success of the programme and welcoming our fourth group of Interns in September”.

Project SEARCH is an inspiring initiative and I am delighted to have been able to share our Interns' success with them at the graduation ceremony. " Professor Jeremy Kilburn

The keynote speaker, Rob Wallen, Principal of North East Scotland College, spoke warmly of his involvement and the ongoing success of the programme and added “Here in the North East we have a great track-record of collaboration between institutions and the link between NESCol and the University of Aberdeen is a particularly strong one across many activities, as are the links the College and the university have with the two local authorities. Adding into the mix for this project Inspire and also the employers who provide placements makes this a very powerful combination. I am delighted to be invited to share in the celebration of the achievement of the students who completed the Project Search programme this year.  We join with our colleagues at the University and other partners in wishing them every success in the future.”

Catriona McCarle, Job Coach (Inspire PTL) added: "It has been an honour to join Project SEARCH in the project's third year at the University of Aberdeen. The Interns have worked so hard to achieve their goals throughout the year, gaining not only 800 hours of work experience, but also valuable skills and work ethics, beneficial to any employer. It has been remarkable to watch the distance travelled by these young people over the course of the year, and on behalf of everyone involved in the programme, I wish them all the best in their next steps into work."