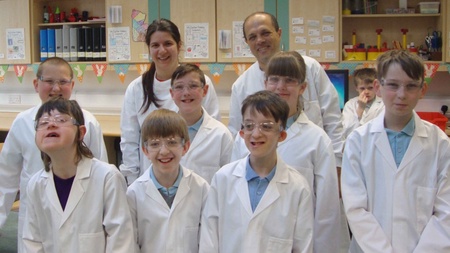 Scientists from the University of Aberdeen have been inspiring children with special educational needs to pursue study in science, technology, engineering and maths (STEM) with a series of specially designed science classes.

Dr Wael Houssen, senior research fellow at the University’s Institute of Medical Sciences, and his team visited more than 130 children at three primary schools across Aberdeen.

The events, supported by the Royal Society of Chemistry outreach fund to Dr Houssen, were a mixture of hands-on practical work and experiment demonstrations and explanations and have been extremely well-received by pupils and teachers alike.

The experiments aimed to introduce fundamental concepts in chemistry such as acidity and basicity, origin of colours in matter, chemical reactions and most importantly to show that chemical ‘experiments’ are part of everyday life in our own homes. To make them as relevant as possible, the experiments made use of materials found in most kitchens, such as baking soda, sugar, vinegar, kitchen soap.

Successful events have been held at Scotstown, Mile End and Woodlands primary schools in Aberdeen with children aged from 5-11 years old.

The project has been a success. It has been hugely rewarding for us to see the children's excitement and enthusiasm for science." Dr Wael Houssen

“The project has been a success. It has been hugely rewarding for us to see the children’s excitement and enthusiasm for science,” said Dr Houssen, who was assisted at the events by second year chemistry PhD student, Cristina Alexandru-Crivac.

Dr Houssen added: “I was disappointed to see that despite government efforts, children with special learning needs are still far less likely to pursue study in STEM subjects. There are doubtless many reasons for this – there is evidence that parents, sometimes unintentionally, discourage their children from pursuing a career in science based on their own low expectations for the child. This is despite the fact that several iconic names in science such as Stephen Hawking, and John Forbes Nash had mental or physical challenges.

“Hopefully, this project and other initiatives like it can help in some way to address that.  I believe that it is important to approach the children at young age and show them in a creative “extracurricular” way that science is fun and important. Parents will see how their children cope with the experience and will build up the necessary confidence in the capabilities of their children. Teachers also benefit by observing different approaches to deliver science to those children”

Jamie Mundie, Deputy Head teacher at Scotstown Primary School said: “This was a fantastic opportunity for our school to be involved in promoting science and it was great to see the children motivated and engaged in their learning.”

Jenny Procter, Principal Teacher (Additional Support Needs) at Mile End school said:  “One pupil comment was ‘I love science’, with another saying ‘this is the best thing ever!!!’. I would definitely say the children got a lot out of the experience and would certainly be keen for Wael to come back at some point in the future to work with the pupils again.”