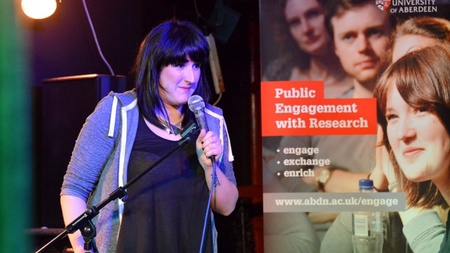 The University of Aberdeen has won two national awards for its efforts in bringing research to the general public.

The annual ARMA awards, organised by the Association of Research Managers and Administrators, celebrate the best support and creativity for research programmes across the UK.

Professor Sir Ian Diamond, Principal and Vice-Chancellor of the University of Aberdeen, said: “Our support teams and academics have worked together exceptionally well to raise our public engagement and I am delighted this has been recognised with these ARMA awards.

“The University of Aberdeen is committed to sharing our world-leading research and its impact, helping to raise awareness and stimulate public engagement with global challenges, while inspiring the next generation to engage with big issues.”

Our support teams and academics have worked together exceptionally well to raise our public engagement and I am delighted this has been recognised with these ARMA awards." Professor Sir Ian Diamond

The winners were announced at the ARMA conference in Birmingham on June 7.

The EXPLORATHON project, supported by the European Commission Horizon 2020 programme, has brought 800 researchers together with 17,000 schools and public over the past two years.  Meanwhile, the University’s wider public engagement effort continues to develop following our RCUK Catalyst award of 2012 which positioned Aberdeen as one of eight centres of excellence for public engagement across the UK.

Dr Kenneth Skeldon, Head of Public Engagement said: “I am delighted that the EXPLORATHON project and our wider public engagement with research strategy have been recognised in the 2016 ARMA awards. We were up against stiff competition from across the UK, and our success reflects the way in which our skills across research, training, outreach and engagement is ensuring that Aberdeen is at the forefront of the public engagement agenda.”

A spokesperson for ARMA said: “Congratulations to all of the 2016 Awards winners and highly commended finalists. ARMA is thrilled to celebrate success and innovation in research management and administration, highlighting the good work that is going on in the sector.”

On Friday 26 September 2014 and Friday 25 September 2015 over 17,000 citizens across Scotland engaged with ground-breaking research as part of EXPLORATHON (European Researchers’ Night Scotland). At the same time, over 300 cities across Europe highlighted the relevance and importance of research to their respective public and stakeholder communities in what has become the world’s largest single knowledge exchange celebration. The evaluation of EXPLORATHON showed researchers citing confidence-building, networking, communications skills, evaluation and event planning among the key attributes enhanced by the project. EXPLORATHON enabled a major evidence-based researcher development project in Scotland, visibly promoting co-research skills and experience.

Practical engagement experience aligned to mutual benefit for academic and external communities is at the core of the PERU mission. Based on six cultural change mechanisms, PERU’s strategy has seen academic engagement increase by 20% per annum since 2012. Providing a suite of over 300 opportunities a year, PERU offers staff and students the first steps into Public Engagement. It has also established a ‘Public Research Interest Group’ and continues to advocate that public engagement can benefit academic endeavours rather than compete with them.