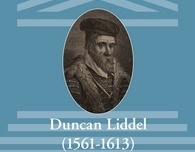 A newly published book will highlight some of the University of Aberdeen's 'hidden treasures' that are part of one of the University's Library's most significant collections of books gifted to the institution more than 400 years ago.

The Aberdeen-born physician, mathematician and astronomer Duncan Liddel (1561-1613) bequeathed his extensive library collection to Marischal College which in the nineteenth century merged with King’s College to form the University of Aberdeen.

Among his collection are rare first and second editions of one of the most famous works on early modern astronomy, Nicolaus Copernicus’s De Revolutionibus, credited withtransforming how scientists think about the universe.

Now a new book discusses Liddel’s place in the networks of scholars of the Northern Renaissance and includes a description of the works in his library.

Professor Karin Friedrich, chair in Early Modern History, co-director of the Centre for Early Modern Studies at the University of Aberdeen and one of the book’s editors, initiated and attracted funding for the project which is based in Aberdeen and Germany. She said: “Duncan Liddel was a great physician, mathematician and astronomer from Aberdeen who maintained large networks with the major European scholars of the time when he accepted a professorship in medicine and mathematics at the University of Hemstedt in Germany. He never forgot his Aberdeen roots, and when he died in 1613 he left money to found the Chair of Mathematics at Marischal College and bursaries that would enable poor students to attend the College.

“He also had the great foresight to donate his extensive library of books on Astronomy, Mathematics, Biology and Medicine along with his mathematical instruments to Marischal College. More than four centuries on they remain a valuable resource for research and study and we are delighted to be able to bring them to a worldwide audience with the release of our new book.”

Liddel never forgot his Aberdeen roots, and when he died in 1613 he left money to found the Chair of Mathematics at Marischal College and bursaries that would enable poor students to attend the College." Professor Karin Friedrich

Liddel’s own copy of De revolutionibus, contains the very rare Commentariolus, an earlier manuscript by Copernicus copied onto blank leaves by Liddel, and other works from the early years of modern astronomy, many of which he had extensively annotated.

Professor Friedrich says Liddel’s own markings are what make his collection so unique and valuable to scholars.

“Not only are the books he gifted to the University now extremely rare, they contain many of Liddel’s own thoughts on astronomy and other subjects, including philosophy and medicine. He took the side of Galenic medical approaches against the ‘new fashion’ of the sixteenth century – Paracelsian medicine. He also got caught up in the theological debates of post-Reformation Germany, where he opposed the more orthodox Lutheran scholars who were ultimately responsible for his resignation from the University of Helmstedt and his return to Scotland.”

“The books in Liddel’s collection held by the University of Aberdeen are real treasures offering a unique perspective into this key transitional period in the sciences and humanities, and we are sure they will be of great appeal to anyone with an interest in the history of scientific thought.”

The book, titled Duncan Liddel (1561-1613). Networks of Polymathy and the Northern European Renaissance, is co-authored and co-edited by Dr Pietro Omodeo from the Max -Planck-Institute for the History of Science in Berlin and has been published in Leiden by Brill’s ‘Scientific and Learned Cultures and their Institutions’ series.

An online exhibition of some of the treasures from Liddel’s  library can be accessed via  http://www.abdn.ac.uk/library/about/special/projects/the-liddel-library/  at  http://uni-helmstedt.hab.de/index.php?cPage=8&sPage=liddel. A complete catalogue of the library is also available with links to digitized texts held in other German libraries.