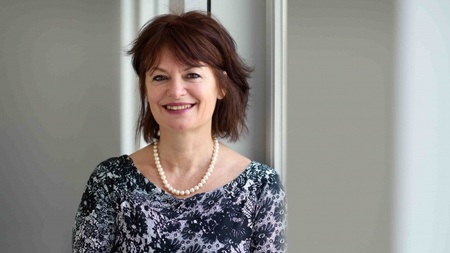 University of Aberdeen Vice-Principal Dame Anne Glover DBE has been appointed to the Board of the Offshore Renewable Energy Catapult as a Non-Executive Director.

One of the most exciting prospects we face is to harness renewable energy. For this reason, I am delighted to join the Offshore Renewable Energy Catapult." Vice-Principal Dame Anne Glover DBE

The Vice Principal for External Affairs and Dean for Europe takes over from Baroness Helen Liddell of Coatdyke, who has stepped down from the Board following a three year term.

ORE Catapult was established in 2013 by the UK Government and is one of a  number of Catapults set up by Innovate UK in high growth industries. It is the UK’s flagship technology innovation and research centre for offshore wind, wave and tidal energy.

Commenting on her appointment, Professor Glover said: “One of the most exciting prospects we face is to harness renewable energy.  For this reason, I am delighted to join the Offshore Renewable Energy Catapult.  Any new technology poses both challenges and opportunities and the ORE Catapult is the catalyst to procure and harness knowledge, engage industry large and small and to accelerate the delivery of sustainable energy options.  I greatly look forward to contributing to that process.”

ORE Catapult Chairman Colin Hood commented, “I am extremely pleased to welcome Dame Anne to ORE Catapult’s Board. Her considerable experience of science, technology and innovation, and of shaping both UK and European policy, will prove invaluable at a critical time for the offshore renewables industry as we seek to drive technology innovation to lower the cost of energy from the UK’s extensive offshore renewable resources.”

About the Offshore Renewable Energy Catapult

The economic opportunity for the UK is immense, with the potential for huge employment, GVA and exports of technology, skills and services, potentially mirroring the success of the oil and gas sector over the past thirty years.

The Catapult programme represents a £1.4bn funding commitment from the public and private sector over five years. Long term, the Catapult will be funded 1:1:1 by central government, the private sector and other sources of funding such as the EU and devolved Governments.