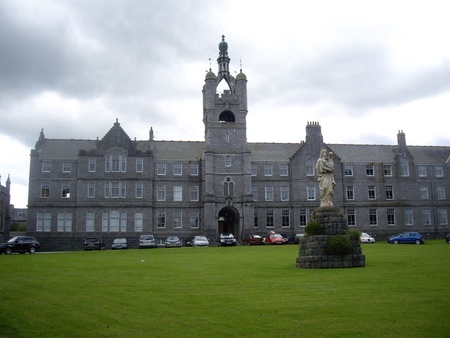 An important collection of rare books has returned to the north-east, 40 years after it was loaned to the National Library of Scotland.

Over recent weeks the Blairs Library, made up of more than 27,000 books and pamphlets dating back to the 15th century, several of which are unique copies, has been moved into specialist stores in the Sir Duncan Rice Library at the University of Aberdeen.

From today (November 11) the collection, including 17 incunables and over  a thousand 16th century books, as well as manuscripts, is available to scholars, students and interested members of the public to search on the Library’s catalogue and to consult in the Special Collections Centre’s Reading Room.

The library collection from St Mary’s College, Blairs (Blairs College) near Maryculter in Aberdeenshire, had been on loan to the National Library of Scotland since 1974. Many of the books and manuscripts in the Collection are closely associated with famous or distinguished individuals, some of whom played a key role in Scotland’s history. These include  volumes belonging to Cardinal Beaton, the last Scottish Cardinal prior to the Reformation, and Archbishop Scheves of St Andrews; 17th century books associated with the exiled Stuart Court in France; and one example of very early English printing which belonged to the great Scottish historian Thomas Innes.

Blairswas from 1829 to 1986 a junior seminary for boys and young men studying for the Catholic priesthood.  However, much of the material in its collections dates from the period following the Reformation, when many Scottish Catholics were exiled abroad. Its Library includes the collections of seminaries where Scottish exiles were trained for the priesthood: the Scots Colleges in Douai (1576-1793) and Paris (1602-1793); the Pontifical Scots College in Rome (founded 1600), and the Scots Benedictine Abbey of St. James in Regensburg, Bavaria.

The move to Aberdeen re-unites the Blairs Library with another historically significant collection, the Scottish Catholic Archives, Historic Archives, which moved to the University last year.

This archive predominantly relates to the Catholic Church prior to the restoration of the Scottish Catholic Hierarchy in 1878 and contains material of regional, national and international significance especially concerning the survival of Catholicism both in Scotland and abroad in the 17th and 18th centuries through the archives of its missions, seminaries and colleges.

The Scottish Catholic Archive also includes letters from Mary Queen of Scots and correspondence relating to Stuarts and their Jacobite companions in exile, as well as papers dating from as early as the 12th century, together with the papers of a significant number of Scottish north-east families.

University of Aberdeen librarian Diane Bruxvoort said: “The Collection’s historic roots in the Aberdeen area make its acquisition by the University and return to the north-east of Scotland a matter of considerable significance.

“Its contents perfectly complement the historic libraries of King’s and Marischal Colleges, as well as the University’s museum collections, rich as they are in Jacobite material. The move to Aberdeen unites this historically significant collection with the Scottish Catholic Archive which is also held in our Library, enhancing the attraction to scholars and members of the public alike.”

Professor Margaret Ross, Head of the College of Arts and Social Sciences at the University of Aberdeen, added: “The University of Aberdeen has an outstanding research pedigree in History and Divinity. Bringing the Blairs Collection to Aberdeen, following the arrival of the Scottish Catholic Archives, will further opportunities for academic research and collaboration in this field.

“These two resources, now in proximity to the superb art and object collection which has never left Blairs College, and surviving Catholic churches, chapels and burial grounds from the 17th and 18th centuries, combine to give Aberdeen a uniquely rich base and depth of resource for the study of the historic Catholic community of Scotland.”