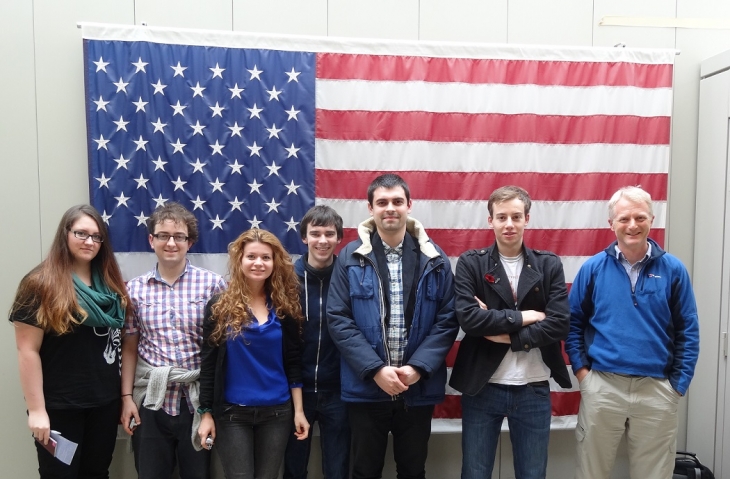 A team of University of Aberdeen students secured two trophies and a gold medal at one of the world's leading science competitions for a new diagnostic test they have invented.

The six undergraduates won best team in the 'Health and Medicine’ track, and were awarded the 'Best synthetic biology measurement approach’ at the iGEM (International Genetically Engineered Machine) competition in Boston.

The team, made up of Ana-Maria Cujba, Konstantin Gizdov James Long, James McAvoy, Joseph MacKinnon, and Martyna Sroka were competing against 260 teams drawn from Universities across the world.

Together they created develop new diagnostic methods for African Sleeping Sickness. The disease, which has the official name Human African Trypanosomiasis (HAT), is transmitted through the bite of the tsetse fly and up to 60 million Africans are at risk of the disease, which undiagnosed is invariably fatal.

Improved methods for diagnosis are needed because the HAT symptoms can easily be confused with those of flu as in its early stages it is characterised by fever, headaches and joint pains.

If left untreated, African Sleeping Sickness can overcome the body’s defences and can cause more extensive damage to the heart, kidneys and other organs, eventually attacking the central nervous system causing disruption to the sleep cycle, which gives the disease its name.

Without treatment, the disease is invariably fatal, with progressive mental deterioration followed by systemic organ failure, coma and death.

The University of Aberdeen team, who are all undergraduates studying a range of disciplines including physics, biology, immunology and microbiology, engineered bacterial cells to detect whether a person has African Sleeping Sickness.

They engineered an E.coli strain to detect the HAT antibodies in infected patients; the E. coli is then triggered to produce a harmless green florescent protein. This protein can then be detected in a lab to indicate that a patient is infected, following which antibiotic therapy can then be administered, usually with a good prognosis for the patient.

But in many of the places most in sub-Saharan Africa most severely affected by African Sleeping Sickness, laboratory facilities are not readily available, so the team has also designed, developed and successfully tested a cheap electronic device to detect the fluorescent protein output by the E.coli.

The device, made using cheap LEDs and a Raspberry Pi computer, costs less than £60, putting a diagnostic kit solution based on the team's concept potentially within reach of healthcare systems in developing countries. This innovation contributed to the team’s award for ‘Best Measurement Approach’.

In addition to the two trophies, the team were also awarded Gold for the standard of attainment in their project.

Konstantin Gizdov, a BSc Physics student said: "The project is an amazing opportunity for students to apply their knowledge and skills into a real research environment. Not only that, but everyone gets to contribute to a relevant aspect of today's industry and real-world problems.

“To have my team go against world-leading universities and come on top in our designated track really puts things in perspective for everyone - students, supervisors and our University as well.”

James Long, an immunology student, said: "I have been really inspired by the field of synthetic biology and am extremely thankful for this incredible opportunity - we were all delighted when we won two awards and a gold medal."

Professor Stansfield, who helped supervise the work, added: “We are delighted by the success of the Aberdeen team. This is a major coup for the University - the iGEM competition brings almost all the best Universities in the world together to compete, including Yale, Harvard, Imperial, Oxford, Cambridge, MIT, Heidelberg, ETH Zurich to name but a few. To have brought home two trophies from the competition is an outstanding achievement.”

More information about the project and team members can be found at http://2014.igem.org/Team:Aberdeen_Scotland

The team was supervised by Professor Ian Stansfield, Dr Suzi Black, Dr Rey Carabeo, Dr Berndt Mueller, and Dr Stefania Spano from the School of Medical Sciences, and Dr Alessandro Moura from the School of Natural and Computing Sciences.

They were supported by their sponsors The Scottish Universities Life Science Alliance (SULSA), BBSRC, The Society for General Microbiology, The Biochemical Society, The Wellcome Trust and the University of Aberdeen.