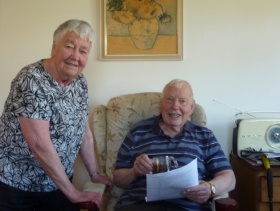 With great sadness we share the news that W. F. H. Nicolaisen, Emeritus Professor at the Elphinstone Institute, passed away in the early morning of Monday, 15 February 2016.

An eminent folklorist and place-name scholar, Bill was also a beloved teacher. His infectious enthusiasm for the disciplines of Folklore and Onomastics — ever strong during a sixty-year career of university teaching — led countless students from both sides of the Atlantic to develop a lifelong appreciation for the importance of ethnographic research in contemporary society.

His resonance on both continents is best demonstrated by the fact that Bill remains the only person to ever have been president of both the American Folklore Society and The Folklore Society in London, the two major societies of his field.

In association with the American Folklore Society and The Folklore Society, the Elphinstone Institute is preparing the publication of Bill’s selected essays in the field of Folklore. The work of selecting and publishing the essays, made challenging due to the sheer number of writings Bill produced in his lifetime (over 600), was Bill’s principal professional ambition in recent years.

The essays demonstrate his innovative thinking, jovial humour, and exceptional writing. The volume will be published by the University Press of Mississippi and we hope it will introduce a new generation to Bill’s eminent work and develop in them, too, a lifelong love for Folklore.

Bill is already missed dearly by his family, friends, colleagues, and students.