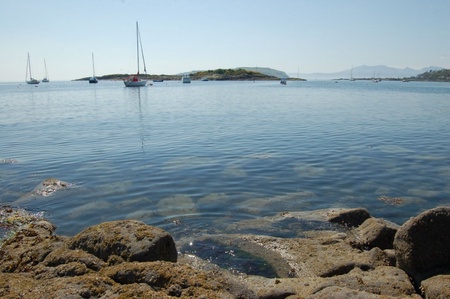 The discovery of microscopic concentrations of gold in rocks from a popular Scottish holiday destination has raised the possibility of bigger finds elsewhere, according to research carried out by scientists at the University of Aberdeen.

Normally gold deposits are found in ‘veins’ found deep in the Earth’s crust which are produced by water flowing at high temperature.

However, analysis of common red sandstone rocks found at the beach at Millport on the island of Great Cumbrae in the Firth of Clyde has revealed tiny concentrations of gold that provide a tantalising clue that could eventually lead to the discovery of much larger deposits elsewhere.

Professor John Parnell from the University’s School of Geosciences is the lead author of the study, which has been published in the Journal of the Geological Society.

He said: “In undertaking this research I was initially interested in analysing little structures found within common red sandstone rocks which we took from the beach at Millport, which to the naked eye appear as tiny black spots.

While there is certainly no prospect of a modern-day gold rush in Millport this analysis is helping us to understand unusual circumstances where gold can be formed." Professor John Parnell

“By analysing the structures using a high-powered microscope, we discovered that they contain concentrations of gold, which is unusual because gold normally tends to be concentrated by hot waters rising up through cracks in the Earth.

“In this this case the gold has been formed and concentrated in a completely different environment, which raises the possibility of similar structures appearing within red sandstone elsewhere but on much bigger scale.”

The research adds to a growing awareness that concentrations of gold are present in red sandstone or other common sedimentary rock, otherwise known as ‘red beds’.

“Some studies have been carried out in England where concentrations of gold have also been found in red sandstone, but not to the consistency that we find within the Millport rocks,” Professor Parnell added.

“So while there is certainly no prospect of a modern-day ‘gold rush’ in Millport this analysis is helping us to understand unusual circumstances where gold can be formed, which in the future may even lead to discoveries that are commercially viable.”