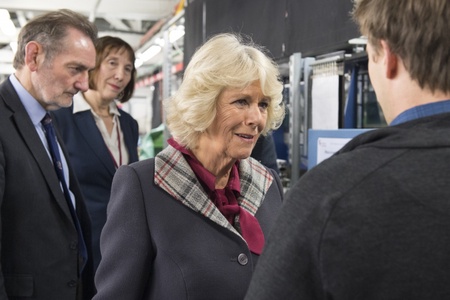 The University of Aberdeen was delighted to welcome its Chancellor, Her Royal Highness The Duchess of Rothesay, to its Old Aberdeen campus today.

Accompanied by Her Majesty's Lord-Lieutenant of the City of Aberdeen, Lord Provost George Adam, The Duchess of Rothesay enjoyed a varied schedule including officially opening the Rocking Horse Nursery and visiting the University’s Fluid Mechanics Laboratory.  Her Royal Highness later visited the Sir Duncan Rice Library and presented a Coat of Arms to the Burgesses of Guild of the City and Royal Burgh of Aberdeen to recognise their Royal Charter, which was presented 800 years ago by King Alexander ll of Scotland.

At the Rocking Horse Nursery, The Duchess took the opportunity to meet staff at the facility and some of the University staff, students and children who make use of the new £2million nursery, which is the first fully certified Passivhaus (Passive House) building in a Scottish university. The ground-breaking nursery is the first pre-school facility in Scotland to adopt this environmentally friendly energy-efficient design concept.  The Passivhaus design provides a high level of comfort for users, while consuming very little energy for heating or cooling.

Her Royal Highness then visited the University’s Fluid Mechanics Laboratory, where she met with researchers and students who showed The Duchess the flumes and a wave machine in action while explaining about the University’s research into the effects of waves on coastal and off shore engineering. She also learned about the role of aquatic vegetation in rivers, and how they help minimise flooding risks and maximise benefits for river ecosystems.

The Chancellor completed her trip to Old Aberdeen by meeting students studying in the Sir Duncan Rice Library and taking the opportunity to view some of the University’s special collections including the Aberdeen Bestiary, an exquisite manuscript from the 12th Century which is considered one of the finest examples of its type to survive anywhere in the world.

While at the library, Her Royal Highness was introduced to members of the city’s Burgesses of Guild and presented them with their new Armorial Bearings to the Lord Dean of Guild, Colin Taylor.

We are delighted to have welcomed the Chancellor on this visit to the University and it is fantastic that Her Royal Highness was able to enjoy such a varied tour during her time with us." Professor Sir Ian Diamond

Vice-Chancellor and Principal of the University of Aberdeen, Professor Sir Ian Diamond, said: “We are delighted to have welcomed the Chancellor on this visit to the University and it is fantastic that Her Royal Highness was able to enjoy such a varied tour during her time with us.

“We are extremely proud of our new nursery and are thrilled that The Duchess was able to open officially the facility.

“It was a good opportunity to showcase the first class research that we carry out here at the University and I am sure Her Royal Highness was interested to hear about the work being undertaken by our teams in the Fluid Mechanics Laboratory.”

The Duchess of Rothesay became the eleventh Chancellor of The University of Aberdeen in 2013. Her Royal Highness visited the University in 2014, when she opened the new Aquatics Centre and presented degrees at a graduation at Elphinstone Hall.