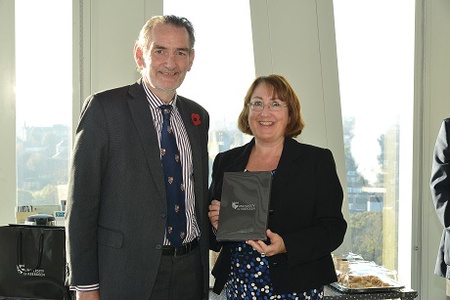 Scotland's Minister for Youth and Women's Employment joined staff and students at the University of Aberdeen to see how being a Living Wage employer has benefited the campus.

The visit was part of Living Wage Week 2015 which aims to further raise awareness in the public, private and third sectors of the benefit to employers of accreditation through the scheme.

Annabelle Ewing, Minister for Youth and Women’s Employment, said: “Research shows that paying the Living Wage benefits both employees and Employers alike. Paying the Living Wage demonstrates a commitment by employers to their staff and in return employers have experienced benefits including increased productivity, reduce absenteeism and improved staff morale.

“In Scotland we have a higher proportion of employees paid the Living Wage than anywhere else in the UK outwith the South East of England and London at  over 80 per cent, and we are committed to doing even more. The Scottish Government are funding the Poverty Alliance to promote the take up of the Living Wage Accreditation Scheme, in every sector across Scotland, with the goal of having at least 500 accredited employers by the end of March 2016.

For us at the University of Aberdeen, becoming an accredited Living Wage employer was a logical next step in underpinning our commitment to keeping people at the heart of our vision for our University." Professor Sir Ian Diamond

“Importantly those employers will also being speaking about their experience of becoming accredited and the difference it has made to them which is why I am delighted to be at the University of Aberdeen. The university become a Living Wage employer earlier this year and I am keen to hear how that has impacted on both staff and the University

Professor Sir Ian Diamond, Principal and Vice-Chancellor, said: “I am delighted to have this opportunity to discuss with the Minister the benefits to organisations in becoming Living Wage Employers. For us at the University of Aberdeen, becoming an accredited Living Wage employer was a logical next step in underpinning our commitment to keeping people at the heart of our vision for our University.

“Our accreditation recognises the commitment we have demonstrated since 2013 in paying all directly employed staff at least the level of the Living Wage, and, importantly, our stipulation that all contractors engaged by the University are also committed to honouring the Living Wage for their own staff working on University premises.”