Festival to celebrate the singing traditions of Scotland, England and Ireland
23 July 2015 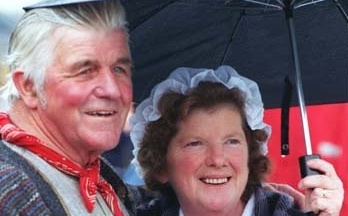 A popular festival to celebrate the singing traditions of Scotland, England, and Ireland will be held at an Aberdeenshire steading from July 24 to 26

A popular festival to celebrate the singing traditions of Scotland, England, and Ireland will be held at an Aberdeenshire steading from July 24 to 26. The annual Traditional Singing Weekend at Cullerlie, now in its 15th year, is a unique celebration, bringing together outstanding traditional singers.

The event, organised by the University of Aberdeen's Elphinstone Institute and Cullerlie Farm Park, near Echt, presents outstanding performers for a weekend which also includes a number of workshops in traditional crafts.

Emeritus Professor Ian Russell, from the University of Aberdeen, said the festival was an opportunity for anyone with an interest in unaccompanied traditional song to hear from talented performers in a unique setting.

“We have a superb line-up. There will be concerts featuring guest singers, singarounds for everyone who wants to join in, talks, and workshops on crafts and song, in fact, something for everyone," he added.

“The weekend is designed to be informal and friendly and is a great way to hear some of the finest traditional singers from across the UK and Ireland. It also continues to be a fitting opportunity to salute the memory of Tom and Anne at their steading where it all began.”

The line-up for this year includes: Barbara Dymock from Fife, who has a fine repertoire of traditional songs; Henry Douglas BEM, a farmer from Bonchester Bridge in the Scottish Borders who is the Official Song Singer for the Common Riding in Hawick; Moira Craig originally from Glasgow, an eclectic singer who performs Scottish traditional songs alongside contemporary and humorous material; Billy Jolly, a retired fish merchant and local celebrity from Orkney, sings about the boy who innocently rosined the bow of his father’s violin with butter to stop it squeaking and performs aerobic versions of whaling ballads.

Travelling from Dublin is Máire Ní Chróinín who inherited her Sean Nós (old style) of traditional Irish singing from her family in Sliabh Luachra on the Cork-Kerry border; the other Irish singer from Howth near Dublin is London-born, Francy Devine, who is giving a talk on ‘The Red Flag’ and other political songs.

The two English singers are from Derbyshire. North-East based Stuart Ashton specialises in humorous dialect songs and monologues. In contrast, Bella Hardy from Edale, ‘BBC Radio 2 Folk Singer of the Year for 2014’, excels in ballads of the fantastical and romantic, some of which she has penned herself.

From nearer to home, Ellen Mackinnon from Aberdeen is a young singer steeped in Scots and Gaelic tradition, who learnt her songs from her own family and visiting singers such as the legendary Stanley Robertson. Russell Taylor is an Aberdonian who mainly sings bothy and traditional ballads from the North-East.

In addition to traditional singing, there will also be workshops and demonstrations in traditional crafts including straw work, wood turning and carving, farmhouse cooking, drystane dyking, and farrier work.