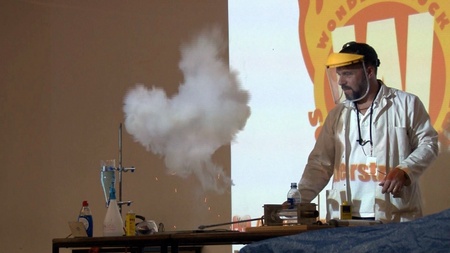 Organisers of the University of Aberdeen's May Festival have hailed the weekend a resounding success as thousands of people braved the showers to attend a wide variety of events.

Over the course of the weekend, the University welcomed thousands of visitors to its Old Aberdeen campus as people from across the city, shire and beyond snapped up tickets in their droves to see the likes of adventurer Matt Dickinson, one of only a handful of British climbers to scale Everest’s north summit, former Newsnight host and journalist Gavin Esler who entertained a sell-out audience with his tales of interviewing the world’s most powerful people, and Patrick Miley, coach and father of one of Scotland’s most successful swimmers, Hannah Miley.

The festival, which is now part of Aberdeen’s Festivals Collective initiative, boasted over 100 events encompassing themes including Film, Music, Word, Gaelic, Food and Drink, Sport, Environment, Science and Current Affairs. The Discover theme, which features events created and delivered by our own staff and students, again proved to be one of the festival’s most popular programmes. Over 60 research staff and students led activities gave visitors the chance to explore and discuss current research through workshops, exhibitions, debates and talks.

This year’s Word strand also attracted crowds, and featured talented authors such as Michel Faber and David Mitchell among many others. The festival music strand also offered a diverse mix of events, with audiences treated to Mozart’s Requiem and the Ogston Music Prize which features some of our most talented musicians.  Special editions of our popular Director’s Cut series also attracted big audiences while our Gaelic events proved extremely popular as ever.

On Saturday festival audiences enjoyed browsing the ever-popular Produce Market at Elphinstone Hall, which featured a number of local companies offering samples of their products.

I would like to personally thank everyone involved in this year's May Festival, including all those creating and running events as well as the volunteers and professional teams that deliver a festival infrastructure of true quality and scale" Professor Sir Ian Diamond

The same venue was transformed into the Hall of Mayhem on Sunday, with revellers able to create their own May Festival memorabilia – including their very own K’Nex car. There was something for all ages, with younger festival goers enjoying soft, creative play.

Elsewhere on campus, the Cruickshank botanic garden and zoology building played host to more than 1,500 visitors over the weekend with displays, hands-on activities and talks hosted by University researchers, our Aberdeen Biodiversity Centre team and a wide range of community and partner organisations.

Dr Kenneth Skeldon, Head of Public Engagement at the University, said: “Our third May Festival has featured our most diverse programme yet, and we have had an absolutely fantastic response from the public. Early indications show more visitors coming onto the University campus for the first time because of the festival and being enthused by the variety of activities on offer. The festival is a unique opportunity to forge stronger, lasting links with our external communities and for our own staff and students to shine in the eyes of the thousands of visitors coming onto campus.

“We receive valuable support from our sponsors and supporters, which this year included;Year of Food and Drink Scotland 2015 (a Scottish Government initiative led in partnership by EventScotland, VisitScotland and Scotland Food & Drink), Marathon Oil, Creative Scotland, , vibrant Aberdeen,  Nexen CNOOC, Total, Bòrd na Gàidhlig and Mains of Loirston Trust. It is thanks to this support and the tireless efforts of our own staff and students, that we are able to programme such a range of inspirational events, many of which are free.”

University of Aberdeen Principal, Professor Sir Ian Diamond said “I would like to personally thank everyone involved in this year’s May Festival, including all those creating and running events as well as the volunteers and professional teams that deliver a festival infrastructure of true quality and scale. Our festival takes pride of place in the cultural calendar of Aberdeen and we look forward to building on its impact and success in the years to come.”