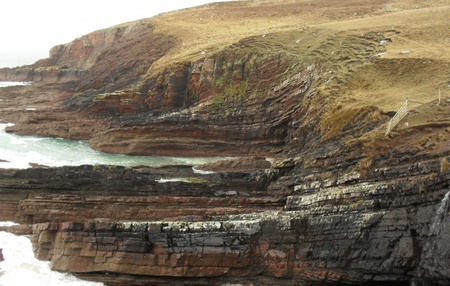 An ancient lake could hold the key to our understanding of how complex life evolved on Earth, according to research carried out by the University of Aberdeen.

Scientists have studied samples of lake sediments deposited 1.5 billion years ago in the Bay of Stoer region in north-west Scotland, and discovered high levels of the metal molybdenum, a key element in the evolution of multicellular life.

The discovery challenges the commonly held view that an important stage of evolution, leading eventually to human life, occurred in the deep ocean, as opposed to a continental environment.

Professor John Parnell, from the University’s School of Geosciences, explains: “Molybdenum was required to support nitrogen fixation, which allowed simple life to flourish and support a food chain. It was also being incorporated into enzymes used by complex life.

“Previous research has measured the amount of molybdenum in rocks from ancient oceans to assess its supply, but found that it was only available sparsely at the time when complex life was expanding about 1.5 billion years ago.

“This new data, gathered from a site in north-west Scotland over the last year, shows that greater quantities of molybdenum were available in a continental environment at this time.  This supports a growing theory that this important stage of evolution was advanced on the continents and not in the ocean.”

The site from which the sediments were recovered is already considered a highly-prized scientific resource, having provided evidence of how a critical point in evolution took place several hundred years earlier than scientists had previously understood.

This new data supports a growing theory that this important stage of evolution was advanced on the continents and not in the ocean." Professor John Parnell

This latest discovery further underlines the importance of the site, whose geographic location makes it ideal for research purposes, as Professor Parnell explains:

“When carrying out this kind of research there are very few rocks that you can study that have been deposited in a terrestrial setting, which is what makes this site in north-west Scotland special.

“There are other possible locations around the world, but these aren’t easy to get to and you can’t travel back and forth to carry out serious research at them.

“The difference with this site is that it’s so well-preserved and easily accessible, which makes it an excellent place to look for the kind of evidence that we have uncovered.

“This research is part of a bigger body of work on these rocks which is ongoing.  It is clear that the site is a very important archive to help us understand the earth’s early history, so we will continue to develop that work at Aberdeen.”

Professor Parnell’s research paper is available to view on the Nature website.