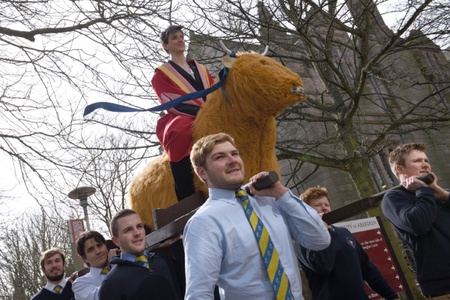 Tradition dictates that the University of Aberdeen's new rector must ride through Old Aberdeen aloft a bull carried at shoulder height by students of the institution.

Today (Monday March 23) Maggie Chapman, Co-convener of the Scottish Green Party, took part in the custom as part of a ceremony which saw her officially installed in the role.

Ms Chapman was voted in by students following an election in November and begins a three-year tenure. She succeeds Dr Maitland Mackie, who sadly passed away last year.

In addition to her role as co-convener of the Scottish Green Party and Edinburgh councillor, Ms Chapman teaches at Napier University and is working towards a PhD in Geography at Edinburgh University.

The Rector, an ancient post dating back to the foundation of the University in 1495, is the students’ representative, particularly in welfare matters, and sits on the University Court.

The ceremony began at 11am with a colourful academic procession representing civic, student and academic life in Aberdeen. University staff and students, along with representatives from the City and Aberdeenshire Councils, Incorporated Trades, alumni, and guests of Ms Chapman, attended the ceremony in King’s College Chapel.

It featured music performed by Alison Euan and Maria Vilberg.  Alison is a final year music student who specialises in Scottish traditional fiddle music. She has performed with the Scots military band at the Royal Edinburgh military Tattoo, and this year she has been invited to play at an arts festival in Norway. From Estonia, Maria Vilbergis a final year music student. She is a gifted pianist who won the prestigious Ogston Music Prize in 2014.

My first major test as Rector will be not falling off Angus the bull this week - either at my installation, or at Saturday's Torcher Parade. Surviving this challenge will set me up for the next three years!" Maggie Chapman, University Rector

Genna Clarke, President for Welfare and Equal Opportunities and Student President Elect made a speech to welcome Ms Chapman to the role.

The installation ceremony culminated with the new Rector being carried by students aloft the student mascot, Angus the Bull, to the St Machar Bar in Old Aberdeen, where tradition also dictates that she buy a round of drinks for her student supporters.

Maggie Chapman said: "I'm honoured to have been elected to the role of Rector at the University of Aberdeen and very much look forward to working hard on behalf of students with the whole university community over the coming years."

"The first major test will be not falling off Angus the bull this week - either at my installation, or at Saturday's Torcher Parade. Surviving this challenge will set me up for the next three years!"

Professor Sir Ian Diamond, Principal and Vice-Chancellor of the University, said: “Ms Chapman will bring to the role of Rector a breadth of experience from her political work, environmental work and life in academia.

“On behalf of the academic community I am very pleased to welcome Ms Chapman to this important role.”

Emily Beever, President of Aberdeen University Students’ Association, said: "Students are really looking forward to the Rector’s Installation and welcoming Maggie officially to her role as Rector. It includes a very Aberdonian tradition of riding Angus the Bull carried by the rugby team! Maggie has intimated she will take on an active role as Rector speaking to students on campus."