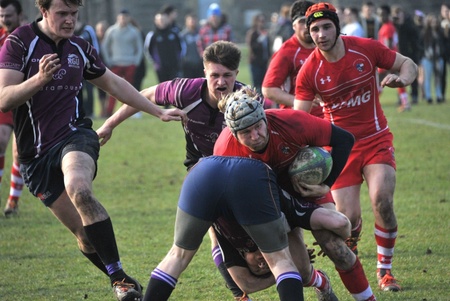 The University of Aberdeen triumphed over their sporting rivals at Robert Gordon University in the annual Granite City Challenge varsity event.

Wins in events including rugby, netball and hockey helped TeamABDN to a 36-26 victory.

He said: “I am delighted that the University of Aberdeen came out on top in this year’s Granite City Challenge, particularly as the standard of competition was so high across all of the sports represented.

“This year’s event had a real competitive edge which made for an exciting day for all concerned, and I’d like to thank our sporting rivals at RGU for helping create such a competitive spectacle.

“As the biggest varsity sporting event in the UK, the Granite City Challenge continues to go from strength to strength, and I’d like to thank all those involved for helping deliver yet another successful competition.”

This year's event had a real competitive edge which made for an exciting day for all concerned, and I'd like to thank our sporting rivals at RGU for helping create such a competitive spectacle." Marc McCorkell, AUSA Sports President

"Firstly it was great to see so many supporters and athletes get behind the equality charity Stonewall's 'Out in Sport' campaign by wearing rainbow laces in support of efforts to create an equal environment for lesbian, gay and bisexual people who take part in sport.

"I'd like to congratulate the University of Aberdeen on their victory, and while I am disappointed with the final result, I am proud of the efforts and performance from the RGU teams.  Each athlete left everything on the field and you cannot ask for anything more from them.

"It was great to see that the majority of games were really close and each sport was played to a high standard.  Every year the standard improves and the friendly rivalry grows that little bit more, so I am already excited for what next year's Granite City Challenge will bring."