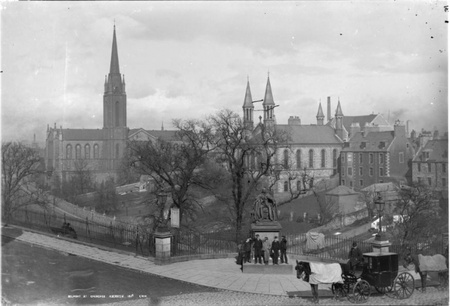 A renowned photographer will give new exposure to images of Aberdeen captured 150 years ago as he 'retraces the snaps' of north-east great George Washington Wilson.

John Perivolaris, an independent documentary and fine art photographer, has spent two weeks recreating some of the most iconic photographs of Aberdeen taken by the royal photographer.

George Washington Wilson (1823-1893) was born in Alvah, Banffshire. The son of a crofter, he went on to establish himself first as an artist then as a photographer at 25 Crown Street, Aberdeen.

In 1853 he was the first person to photograph the Queen and Prince Consort at Balmoral, later receiving many more commissions from the Royal family, and by the early 1880s the company he founded had become the largest and best-known photographic and printing firm in Scotland.

Wilson toured the world with his camera but he also recorded on glass plates many views of his native north-east and particularly Aberdeen city.

Some 45,000 of these are held by the University of Aberdeen and have been preserved and digitised.

Perivolaris has been working with these archives to identify a selection of key images to inform his own photographic journey around the city.

He has captured many of the same images from the same vantage points using a traditional style 4 x 5 camera with a tripod and hood, to replicate the equipment Wilson would have used.

The images captured by Perivolaris will form part of a new exhibition set to open in The Gallery of the Sir Duncan Rice Library towards the end of the year, where they will be displayed alongside Wilson’s own photographs.

“Wilson was able to capture ‘moments in time’ and we want to be able to compare and contrast these to the modern day city, focusing on key landmarks such as the harbour area and Union Street.

“John Perivolaris specialises in photographing urban landscapes and he will bring his own unique perspective to the cityscape just as Wilson did.

“He has employed many of the same photographic techniques as Wilson, retraced his steps where possible and found new vantage points to view the city which didn’t exist in Wilson’s time.

“We look forward to seeing the results brought together for what is sure to be a fascinating exhibition providing the public with an opportunity to view both sets of photographs side by side.”

John Perivolaris said: “The work of the photographic pioneer George Washington Wilson marks a significant moment in photographic history, when the medium’s evolving technology, in the form of faster shutter speeds, better lenses, and more sensitive emulsions, allowed photographers to document the activity of people in rapidly urbanising societies.

“Wilson’s work traces this evolution from photographs of `cities of the dead’ devoid of human activity, to the blurred passers-by in `cities of ghosts’, to the instantaneous capture of sharply focused citizens.”

The project, titled Cities of Ghosts, has been supported by the Aberdeen Humanities Fund and the exhibition is expected to open in late 2015.