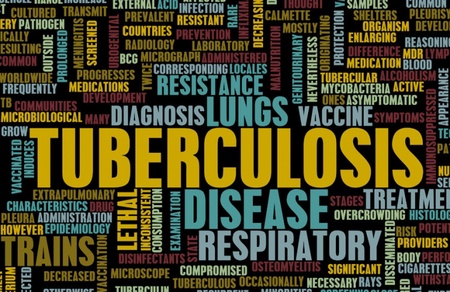 A team of scientists led by the University of Aberdeen has identified a key receptor involved in the control of tuberculosis (TB) which could help to identify those most likely to get the infection.

Worldwide TB remains a killer with nine million people falling ill and one and half million of those dying from the disease each year*.

Working in collaboration with researchers from South Africa, Indonesia, Japan, the Netherlands and England, Aberdeen scientists have identified a key molecule involved in the control of TB and have shown that certain genetic changes in this molecule, known as a polymorphisms, makes some people more likely to succumb to the disease than others.

Professor Gordon Brown from the University of Aberdeen led the study and its findings are published in the journal Cell Host and Microbe.

He said: “In order to detect pathogens our immune system is equipped with pattern recognition receptors (PRRs). These receptors activate reactions within the body that are essential for controlling the infection.

“Tuberculosis (TB) caused by Mycobacterium tuberculosis is one of the leading causes of infectious disease-related death worldwide but we still do not fully understand how the immune system reacts to the disease.

We have been able to identify one of these key receptors and how a genetic change in this receptor increases susceptibility to TB." Professor Gordon Brown

“We have been able to identify one of these key receptors and how a genetic change in this receptor increases susceptibility to TB.

“This could mean that we could able to identify some of those most likely to get TB at an earlier stage.”

The World Health organisation estimates 37 million lives were saved through TB diagnosis and treatment between 2000 and 2013 but resistance to the drugs used to treat it is growing.

Professor Brown added: “A better understanding of the disease is crucial if we are to cope with infections, particularly as drug resistance increases.

“We hope that in the longer term this step forward in our understanding of how the immune system recognises TB might lead to better diagnostic tools and better outcomes for those with the infection.”

The academic paper is available at Cell Host and Microbe 11 February.

Key facts about tuberculosis from the World Health organisation:

* Tuberculosis (TB) is second only to HIV/AIDS as the greatest killer worldwide due to a single infectious agent.

* TB is a leading killer of HIV-positive people causing one fourth of all HIV-related deaths.

*According to figures from the World Health Organisation