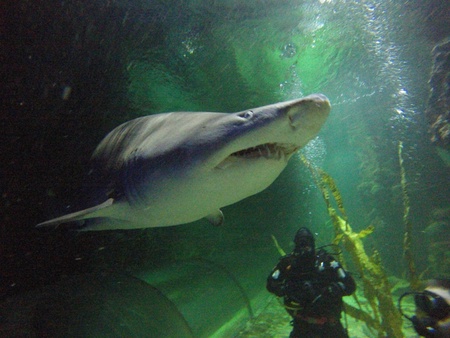 The Elasmogen team, from the Scottish Biologics Drug Discovery Facility at the University of Aberdeen, has further strengthened its global intellectual property (IP) position with the granting of a patent in the US, underpinning the generation of its VNAR protein drugs developed from sharks.

Aberdeen’s VNAR immunisation technology is already patented in other parts of the world and has been used successfully to generate lead compounds in inflammatory disease and cancer.  Elasmogen’s IP portfolio now covers four patent families which consist of more than 30 patents pending and granted worldwide.

VNARs are found in sharks as part of their immune system and have a similar protective role to antibodies present in the human body.  What makes them different and special from a biotechnology and drug perspective is that they are the smallest molecules of this type identified so far in the animal kingdom (1/12 of a human antibody).  This small size allows them access to parts of the body our antibodies can’t reach, including deep inside solid cancer tumours.

Elasmogen’s new US patent protects the use of the core VNAR technology - and importantly also protects their candidate hEO6 which can significantly extend the effective life of other partner drugs in the body.  Many drugs have to be taken every few hours; however, if joined to hEO6 their useful potency can be increased from hours to weeks.

This work has been funded by Scottish Enterprise and by the Biotechnology and Biological Sciences Research Council (BBSRC), with the award (£1.5 M) used to successfully modify the original VNAR (EO6), isolated from an immunised shark, into a humanised form (hEO6) which will now be developed for eventual use in man.  In an exciting additional development these VNARs has also been further enhanced to carry highly toxic drugs that are potent killers of cancer cells.

Dr Caroline Barelle, who has a background in drug discovery and will be the CEO and CSO of the new company Elasmogen Ltd when it spins-out of the University of Aberdeen later this year, explains:  “We are delighted that both our science and intellectual property has progressed so well. This joining by conjugation chemistry of toxic drug “war-heads” to relatively delicate proteins can sometimes be a tricky process.  One might predict that proteins that come from sharks would be tough and in this case at least they really are.  This means that we can use ‘harsh conjugation chemistry’ to get efficient loading of drugs onto our VNAR domain to generate a molecule that can both enhance the efficacy of other drugs by increasing their time in the body, whilst also being a potent cancer killer in its own right.”

This joining by conjugation chemistry of toxic drug 'war-heads' to relatively delicate proteins can sometimes be a tricky process. One might predict that proteins that come from sharks would be tough - and in this case at least they really are." Dr Caroline Barelle

The team have already shown that they can get their tumour specific VNARs to bind to receptors that are on the outside surface of cancer cells and then be internalised or 'swallowed'.  Once inside the cell the VNARs are able to release their anti-cancer payload killing these cells almost instantly.  This targeted approach, that the Aberdeen team call a VDC (VNAR-Drug Conjugate) should deliver improvements for patients as the treatments will only kill cancer cells and not surrounding healthy tissue.  This minimises the toxic side-effects often associated with anti-cancer therapies and allows clinicians the freedom to use mixtures of different cancer treatments capable of killing even the most stubborn cancer cell types, whilst limiting the development of resistance to these drugs.  With the triple success of new IP, successful humanisation and successful drug conjugation the team are now predicting that the first VNARs could be in patient trials within 3 years.

Dr Barelle concluded by saying:  “Sharks are often considered the most sophisticated and ruthless of predators.  We hope that by harnessing the power of their immune system we can turn VNARs into the same ruthless killers of cancer cells.”

Dr Fergus McKenzie, Programme Manager from Scottish Enterprise, added:  “We have been delighted with the progress made by the Aberdeen team.  We are particularly pleased that Dr Barelle and her colleagues have hit and surpassed all their scientific milestones whilst also not forgetting to meet their important commercial objectives.  This successful granting of a US patent for Scotland will also allow Caroline to move a significant step closer to the establishment of a new Scottish drug discovery company.  .

The University of Aberdeen, and a series of its successful spin-outs, have a strong track record in drug discovery and development and this was recognised recently by the British Pharmacological Society for its “ground-breaking achievements in this field”.

Dr Barelle currently leads the team of senior research scientists developing novel biologic bio-tools and therapeutics based on shark single binding domains or VNARs. Her previous roles include Head of VNAR Development at Pfizer and Wyeth where she led the single-domain antibody team isolating and progressing leads through to late pre-clinical assessment.  Prior to this she was Programmes Manager at the antibody engineering company, Haptogen Ltd, acquired by Wyeth in 2007.  Caroline will become the new CEO/CSO of the University spin-out Elasmogen Ltd in 2015.