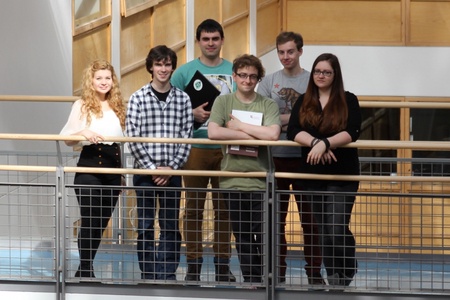 Six University of Aberdeen students will head to Boston on Wednesday to a major international science competition to showcase a new diagnostic tool they have created.

They have spent the last six months working alongside academics in the University’s School of Medical Sciences and the School of Natural and Computing Sciences to develop new diagnostic methods for African Sleeping Sickness.

The disease, which has the official name Human African Trypanosomiasis (HAT), is transmitted through the bite of the tsetse fly and up to 60 million Africans are at risk of the disease, which undiagnosed is invariably fatal.

Improved methods for diagnosis are needed because the HAT symptoms can easily be confused with those of flu as in its early stages it is characterised by fever, headaches and joint pains.

If left untreated, African Sleeping Sickness can overcome the body’s defences and can cause more extensive damage to the heart, kidneys and other organs, eventually attacking the central nervous system causing disruption to the sleep cycle, which gives the disease its name.

Without treatment, the disease is invariably fatal, with progressive mental deterioration followed by systemic organ failure, coma and death.

The University of Aberdeen team, who are all undergraduates studying a range of disciplines including physics, biology, immunology and microbiology, have engineered bacterial cells to detect whether a person has African Sleeping Sickness.

They have engineered an E.coli strain to detect the HAT antibodies in infected patients; the E. coli is then triggered to produce a harmless green florescent protein. This protein can then be detected in a lab to indicate that a patient is infected, following which antibiotic therapy can then be administered, usually with a good prognosis for the patient.

But in many of the places most in sub-Saharan Africa most severely affected by African Sleeping Sickness, laboratory facilities are not readily available, so the team has also designed, developed and successfully tested a cheap electronic device to detect the fluorescent protein output by the E.coli.

The device, made using cheap LEDs and a Raspberry Pi computer, costs less than £60, putting a diagnostic kit solution based on the team's concept potentially within reach of healthcare systems in developing countries.

Joseph Mackinnon, Microbiology student from Macduff in Aberdeenshire, said: “Working on the project has given us all new knowledge and skills and it is wonderful to have been able to come together to create something which could save lives in the future.

“We are all looking forward to the iGEM competition which gets underway on October 30 at the Massachusetts Institute of Technology (MIT) in Boston.

“It will be great to meet students from other universities around the world who are also working on synthetic biology projects but daunting to present our work in front of an audience of 2500 delegates.”

The Aberdeen team is in the running for one of a series of prizes, including best project in the Health and Medicine Track (one of 15 themed tracks covering projects in different subject areas), best poster, best presentation, and best wiki. All teams also qualify for either bronze, silver or gold medals depending upon their level of attainment during their project.

Their work was supervised by Professor Ian Stansfield, Dr Suzi Black, Dr Rey Carabeo, Dr Berndt Mueller, and Dr Stefania Spano from the School of Medical Sciences, and Dr Alessandro Moura from the School of Natural and Computing Sciences.

The team's activities were supported by their sponsors The Scottish Universities Life Science Alliance (SULSA), BBSRC, The Society for General Microbiology, The Biochemical Society, The Wellcome Trust and the University of Aberdeen.

Professor Stansfield added: “E. coli bacteria come in different forms and although some types can cause disease, others, including the type used in this project, are valuable workhorses in biotechnology, helping science produce medicines such as insulin.

“The students have worked extremely hard to produce this new detection device for African Sleeping Sickness and we wish them every success in the competition.”

More information about the project and team members can be found at http://2014.igem.org/Team:Aberdeen_Scotland