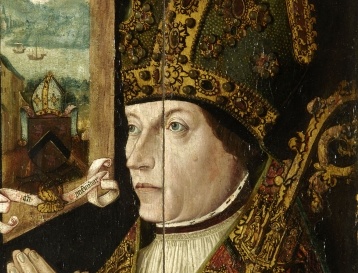 October 2014 marks 500 years since the death of Bishop William Elphinstone (1431 - 1514)but his legacy still continues to shine in Aberdeen. He created the University of Aberdeen, as King's College, and commissioned major building and infrastructure work including the construction of King's College Chapel and improvements to St Machar's Cathedral, while every day, traffic still crosses the bridge he endowed over the River Dee.

But his influence stretched well beyond the Granite City. Elphinstone was a trusted minister of state, a notable lawyer and senior diplomat, and brought the first printing press to Scotland in 1509.

As part of commemorations to mark the quincentenary of his death, a new exhibition dedicated to his life and achievement, Elphinstone: Renaissance in the North, will open at the Sir Duncan Rice Library at the University of Aberdeen on October 2.

It will bring together a remarkable number of surviving treasures from the period and will be a first opportunity for the north-east public to see a 500-year-old chest recently identified as a wedding gift for the marriage of Scottish King, James IV and Margaret Tudor, the daughter of the English King Henry VII.

Elphinstone was influential in bringing about their union as he sought a lasting peace between Scotland and England and the chest bears striking similarities to woodcarvings in King’s College Chapel.

Little material has survived from pre-Reformation Scotland and the exhibition is the first time these historically significant items from the National Library of Scotland, The Blairs Museum and the University of Aberdeen’s collections have been brought together for the public to see.

The exhibition will feature a portrait of Elphinstone - the only surviving picture of an identifiable non-royal individual from the period - and a copy of the printed Breviary of Aberdeen, the first book to be published following the introduction of the printing press to Scotland, which contained set prayers for use by the clergy of Scotland, arranged as the first distinctively Scottish Book of Hours.

Other ‘treasures’ include books and manuscripts donated by Elphinstone to the University, and pre-Reformation Ecclesiastical textiles. Also on display will be a recently discovered and conserved Donor Panel from the Scottish Catholic Heritage Trust, a fine likeness of a Scottish layman, thought to be by a Scottish painter of the late fifteenth century.

Professor Peter Davidson, Chair in Renaissance Studies at the University of Aberdeen, said: “Despite his achievements, to the majority of Scots, Elphinstone remains to some degree an unknown figure.

“His influence in the late fifteenth century, an age which used to be thought of as a dark period of decline, conflict and ecclesiastical decadence, was pervasive - and that influence was all for progress, an attempt to realise a Scotland which was truly of the Renaissance.

“At the heart of his work, after he became bishop of Aberdeen in 1483, was the good of the local community as well as of the wider Scotland coming into being under his Royal master James IV.

“Throughout he was a man of the Renaissance, a man of the international New Learning – he sponsored the introduction of printing to Scotland to print a Breviary and the University which he founded in Aberdeen was intended to be a beacon of the New Learning, a light for the north.

“As well as investments in bridges and church-building, the University was at the heart of his project. Having the ear of the king and the pope, he shared his dream to see a place of learning where those living far from an established university could receive an education, supplying northern Scotland with lawyers, doctors, scholars and priests who would be qualified to study and teach at any university in Christendom. He received Papal permission to found a university, in 1495, the institution which became King’s College and is today the University of Aberdeen.

“Although very little material now exists from pre-Reformation Scotland, Elphinstone was remembered with such reverent affection within his diocese that major relics of the bishop and his world survived, loyally preserved.”

Siobhan Convery, Head of Special Collections at the University of Aberdeen, added: “

“Bishop Elphinstone’s achievements were extensive and his legacy extends well beyond Aberdeen and Scotland so we are delighted to be opening an exhibition dedicated to his life as we prepare to mark the quincentenary of his death.”

“Much of this material is housed in the University of Aberdeen’s Special Collections and will be brought together for the first time in the exhibition Elphinstone: Renaissance in the North. This will be complemented by items generously loaned to us by private collectors, the National Library of Scotland and the Blairs Museum.

“It is a fitting tribute that we are able to mark the 500th anniversary of the death of the University’s founding father with an exhibition in the modern Sir Duncan Rice Library, which sits in the heart of the ancient campus Elphinstone created.”

Jane Geddes, Professor of History of Art at the University said the influence of Elphinstone was still clearly visible in King’s College today.

“This exhibition of Elphinstone’s material world is complemented by his far greater legacy, namely King’s Chapel,” she added.

“Its Crown Tower and exterior heraldry stridently proclaim the loyalty of the university to the monarch. As a diplomat, Elphinstone worked to secure the marriage between James IV of Scotland and Princess Margaret Tudor of England.

“The chest in the exhibition, with its IM monogram and tasselled love-knot, has claims to being  a gift for that wedding. In the chapel, carvings of the thistle and rose contain the same symbolism. Built with costly imported sandstone and embellished with generous stained glass windows, the chapel was the jewel of Elphinstone’s endowment, treasured and preserved through centuries of religious ferment. With its ornate woodwork on stalls and ceiling, it preserves the most complete medieval church interior in Scotland.”

The exhibition Elphinstone: Renaissance in the North opens on October 2 and will run until March 15 for more details visit https://www.abdn.ac.uk/special-collections/previous-collection-highlights-96.php

Born out of wedlock in 1431, Elphinstone was brought up among clerics in the shadow of Glasgow Cathedral, and he followed his worldly father into the priesthood. William Elphinstone’s vocation was sincere. He was devoted to the Virgin Mary, the only feminine presence in his life: his biography written by Hector Boece reports a vision in which She appeared to speak to him, saying ‘turn your entire self towards virtue, and when you receive the [bishop’s] mitre which I will give you, promote the religion of Christ by repairing my churches’. Certainly, Elphinstone built the Snow Kirk and University Chapel in Old Aberdeen and another Snow Kirk at Corgarff, all dedicated to the Virgin.

Elphinstone graduated from Glasgow University in 1462, continuing his studies in canon law for a further three years.  Like his clerical father before him, he then completed his studies abroad at the universities of Paris and Orleans. Clerics formed more than the backbone of the Scottish judicial system in the fifteenth century: all servants of the state were educated Churchmen. Shortly after Elphinstone returned home in 1471 – called back to become the chief officer of the diocese of Glasgow – he was recruited to the royal council, eventually emerging as a diplomat and senior negotiator of royal treaties.  Titles and honours followed.  As well as becoming Bishop of Aberdeen, Elphinstone was variously Chancellor of the Kingdom of Scotland, keeper of the Privy Seal and Commissioner of Crown Lands.

After standing down from his government position as Chancellor of Scotland in 1488, he turned his talents to the internal reform of his diocese. As rector of St Nicholas in Aberdeen, Elphinstone organised the funds to complete the choir and he also carried our building and works at St Machar’s Cathedral, completing the central tower with a steeple like that at St John’s in Perth and furnishing it with 3 bells weighing 12,000 lbs. Although it was not completed in his lifetime, Elphinstone established preparatory work for constructing the Bridge of Dee. He ordered the collection of building materials and bequeathed money to finish the project after his death, a task that was overseen by his successor Bishop Dunbar in 1529. He also did much to reform the religious life of Aberdeenshire, and made the cathedral canons into a community of well-educated and effective priests.

The Bishop was deeply concerned with questions of law and advocated the “laicisation” of justice, opening the profession to laymen. Once the Papal Bull was granted, Elphinstone moved to draw in the best and brightest teachers.  Typically, in an age when it was the rule for only priests to teach, the bishop was open to the appointment of anyone with talent.

His curriculum was no less ambitious.  In addition to training lawyers, clerics and administrators, so vital in the development of the Scottish state, Elphinstone also ensured – through the provision of a university mediciner – a flow of doctors, too.  But arguably his greatest legacy, not just to the university but to the nation as a whole, was the introduction of printing, seen first in the Aberdeen Breviary. It is a substantial work of historical scholarship, a considerable gathering of earlier texts, joined with new hymns written in the fluent Latin of the New Learning.