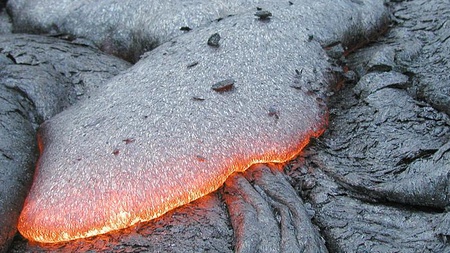 Worldwide attempts to tackle global warming by injecting carbon dioxide into underground volcanic rock have been informed by new research that shows the process happens naturally on a massive scale over millions of years.

Industrial-scale injection of carbon dioxide into naturally occurring basalt lava rock is a strategy being trialled at sites around the world, including Iceland, India and the US.

A study by Geoscientists at the University of Aberdeen revealed that this process has happened in nature in the past and the information could give an idea of how much CO2 the rocks could potentially hold. The findings have been published in the Transactions of the Royal Society of Edinburgh.

“Basalt lava is created when volcanoes erupt,” explains Professor John Parnell from the University of Aberdeen.  “In fact, a significant amount of the CO2 in our atmosphere, up to 150 million tonnes every year, comes from volcanoes but the basalt lavas that these eruptions produce absorb a significant proportion of this. It’s a sort of self-regulating mechanism – nature takes care of her own problem.

“The magnesium and calcium in the basalt lava reacts with the CO2 in the atmosphere to form chalky materials similar to limestone, and during this process the carbon is removed from the air and locked away in carbonate minerals.

“What’s significant is that we’ve shown that it has, and can, happen on a really big scale and this gives us encouragement. We’d never previously measured numbers for what had happened in the geological past.”

What's significant is that we've shown that it has, and can, happen on a really big scale and this gives us encouragement. We'd never previously measured numbers for what had happened in the geological past." Professor John Parnell

In July, 2013 researchers from the US Department of Energy injected 1,000 tonnes of CO2 into an underground basalt formation at one of the test sites near Wallula, Washington, in the US. This was only the second time the process had been tested in the field, following the 2012 project being run in Reykjavic by a consortium of US and European scientists. Early indications show that the process has significant potential.

The basalt lavas studied in the Aberdeen-based project are around 400 million years old and belong to the geological period known as Devonian or Old Red Sandstone. There are large amounts of the rock in Scotland, including in Angus, Stirlingshire, Perthshire, Lanarkshire, and Argyll around Oban.

“We’ve examined these rocks and looked at the minerals that have formed due to the reaction with CO2 at that time. From this we’ve made a lot of measurements which has allowed us to do some quantitative calculations to get an idea of rock’s capacity to soak up the CO2.

“We can use this data as a frame of reference for what could be possible on an industrial scale. There are many different options for soaking up carbon dioxide and our work supports the view that reacting it with basalt is a very fruitful way of soaking it up and is something that could be done on a large scale, because there are huge areas of basalt lava on the planet.

“However it’s difficult to compare the two fully, as the timescale over which it’s happened is far different. Man wants to do it over years, whilst nature has done it over tens of thousands of years.”