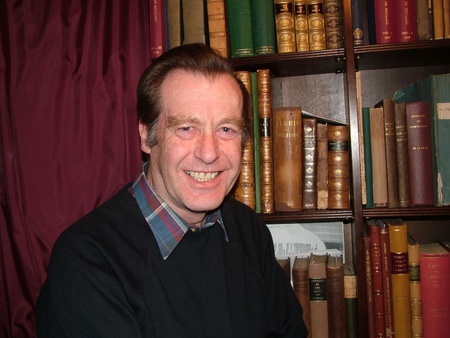 The rich history of Scottish fossils will be discussed by author and geologist Professor Nigel Trewin at Café Scientifique Inverness on the 16 September.

Scotland has an unusual collection of diverse fossils which are of geological importance. Professor Nigel Trewin, a University of Aberdeen emeritus Professor, will be discussing some of the most important ones at the Café Scientifique Inverness event alongside a signing of his book, released in 2013, Scottish Fossils.

Professor Trewin said: “Scotland has very diverse geology for a small country, and this diversity is reflected in the fossils, which span some 800 million years of Earth History.

Scotland boasts many World-class fossil localities yielding fossils with superb preservation, such as Devonian fossil fish from Caithness, and primitive land plants and animals from Rhynie in Aberdeenshire.

Scottish geologists played a major part in the development of palaeontology in the 19th C., and Hugh Miller popularised geology through his books such as 'The Old Red Sandstone.”

Professor Trewin is Honorary Curator of the Geological Collections at the University of Aberdeen and Chairman of the Friends of Hugh Miller charity.

Scottish Fossils, written by Professor Nigel Trewin, documents 100 specimens – from the Caithness and Angus fossil fish to the dinosaurs on the Isle of Skye – providing insight and history behind the discoveries and their significance.

Academics will give insights into their research as part of the institution’s Café discussion series, which aims to engage the public with topics across the scientific spectrum.

The Café series allows the public to gain insight and understanding from researchers in a way that is informal and engaging. " Dr Heather Doran

The current Café Scientifique series, running monthly, has covered a wide range of topics. The final event in October will see Professor Philip Wilson the Director of the Centre for Rural Health will ask the question, ‘Why do happy children live longer?’

Café Scientifique Inverness events are free to attend and held at Waterstones in the city’s Eastgate Shopping Centre once a month at 7pm.

Dr Heather Doran from the University's Public Engagement with Research Unit said: “The Café series allows the public to gain insight and understanding from researchers in a way that is informal and engaging.

“The topics covered showcase the vast range of compelling and often cutting-edge scientific findings being developed by experts from the University of Aberdeen and other academic institutions in Scotland.”

For more information on the Café Scientifique Inverness series’ and other Café series in Aberdeen visit www.engagingaberdeen.co.uk