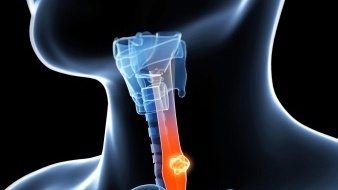 Findings of a trial of a drug aimed at treating advanced oesophageal - or gullet - cancer could lead to a new treatment approach for a sub-group of patients with this kind of cancer.

The University of Aberdeen was involved in a UK wide study to see if the drug gefitinib - already used in lung cancer - could help treat oesophageal cancer. The Cancer Oesophagus Gefitinib trial was the first study conducted in oesophageal cancer patients whose disease had progressed after chemotherapy.

But results - published in The Lancet Oncology – showed gefitinib had little impact on the majority of patients and, overall, only a small effect on survival rates.

However the drug did have a strikingly beneficial effect on a small subset of patients - helping control their symptoms, improving their quality of life and prolonging their survival.

Now scientists say a test should be developed to identify those patients who seemed to get the marked benefit from the drug.

Dr Russell Petty, Clinical Senior Lecturer at the University of Aberdeen and Honorary Consultant in Medical Oncology with NHS Grampian, is the senior author on the Lancet Oncology paper.

Dr Petty said: “Oesophageal – or gullet – cancer is the sixth most common cause of cancer death in the world. Prognosis is extremely poor with between 10% and 15% of patients surviving five years.

“Unfortunately treatment of this type of cancer is largely palliative and, in contrast to other types of cancer, progression in developing new treatments for oesophageal cancer has been very difficult with only limited success in the last 20 to 30 years.

“Gefitinib is a specific kind of targeted anti-cancer agent that is already used to treat lung cancer. As it has only mild side effects, and is a tablet which means it can be given on an out-patient basis, we wanted to see if it could be used to treat oesophageal cancer too.”

Researchers recruited 450 patients - who had already undergone chemotherapy - from 48 centres across the UK. Half were given the drug and half were given a placebo.

Oesophageal - or gullet - cancer is the sixth most common cause of cancer death in the world. Prognosis is extremely poor with between 10 and 15 percent of patients surviving five years. " Dr Russell Petty

“The vast majority of patients did not respond to treatment,” said Dr Petty.

“However a small sub-group - about 15% - did respond dramatically to the drug. Ordinarily this is a group of people who would be expected to die within a few months. But their symptoms improved rapidly within a few weeks of starting treatment and their disease was controlled in some cases for nearly two years. These patients were able to get on with their lives normally in this time. This is a very exciting finding from the study as it suggests that this sub-group of patients really benefit from the drug.”

As the drug only helped the small subset, Dr Petty does not believe that it should be offered to all gullet cancer patients.

“Thanks to funding by the Scottish Government, Chief Scientist’s Office and the Grampian Gastro-oesophageal Cancer Research Fund or GASTROCAN, we are now taking this forward at the University of Aberdeen.

“We believe we are already well advanced in developing such a test- if we can do  this then I believe we would have a  much needed  effective new medicine for oesophageal cancer,” said Dr Petty.

“While the drug is not a cure, if it could help a subset of oesophageal cancer patients control their symptoms, enjoy a better quality of life, and live with the disease, then this would be a really positive step.

“Importantly I think it also indicates an Achilles’ heel in oesophageal cancer that we can exploit to develop better medicines in the future. We desperately need new therapies for this difficult-to-treat cancer where the treatment options are many years behind what is available for other cancers.”

The study was funded by Cancer Research UK.