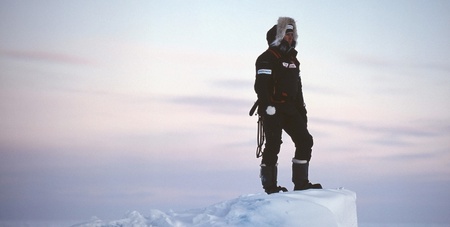 The University of Aberdeen will celebrate the pioneering spirit of Scots in the first wave of emigration to Canada with a day of family fun and a talk by a leading arctic explorer.

On Wednesday (August 6) ‘Pioneer Day’ will be held in the Cruickshank garden where groups of children will be able to take part in free activities including shelter building, fire lighting with mud pies, and wilderness activities.

In the afternoon, drop-in sessions for families will run in the Sir Duncan Rice Library with pioneer songs, storytelling and pioneer crafts.

On Thursday (August 7) the University will welcome explorer Pen Hadow, who became the first person to trek solo, without re-supply, from Canada to the North Pole – a feat that has never been repeated.

He will give a free illustrated talk outlining his exploits, which have also taken him to the South Pole, and have seen him swim his way some of the way through unimaginably cold waters, fight frostbite and even polar bears.

Hadow will also discuss the role of the explorer as a communicator and collector of information between the natural world and the scientific research laboratory.

The events form part of the programme based around the University’s New Found Land exhibition, which runs until August 30, and documents the journey of early emigrants from Scotland to Canada and the subsequent cultural exchange between the two nations.

They were the pioneers of their generations and we are celebrating that spirit through our series of public events. " Siobhan Convery

Siobhan Convery, Head of Special Collections at the University of Aberdeen, said: “Our New Found Land exhibition shares the stories of those who left their homes in Scotland in search of a new life thousands of miles away in Canada.

“During the nineteenth century, the wanderlust that had long been a national characteristic, burst into new life in a sustained tide of emigration that would carry two million Scots to overseas destinations by 1914.

“Men, women and children from all over the land and from all walks of life sought adventure or sanctuary beyond Scotland’s shores. A further two million Scots went on to leave during the twentieth century, especially in the 1920s.

“They were the pioneers of their generations and we are celebrating that spirit through our series of public events.

“We are delighted to be able to welcome Pen Hadow – a true modern-day explorer - to the University and we are sure his free talk will prove both interesting and insightful.

“We also have a host of family-friendly events running at out ‘Pioneer Day’ on August 6 which will be entertaining and educational fun for all the family.”

The events are supported by Aberdeen City Council’s Vibrant Aberdeen funding and full details can be found at www.abdn.ac.uk/events/5645/. Anyone interested in attending either event should contact scc.events@abdn.ac.uk or call 01224 273049