Why the Scots are red-haired, kilt-wearing misers: Scientists reveal the origins of stereotypes
24 July 2014 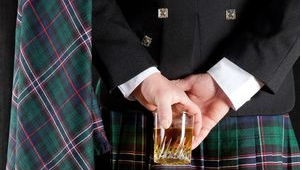 Scottish people are miserly, scientists are geeky and men like the colour blue - or so cultural stereotypes would have us believe.

Regardless of whether we believe them to be true we all have extensive knowledge of cultural stereotypes. But how does this information become associated with certain groups in the first place?

University of Aberdeen research published in the journal Psychological Science suggests that cultural stereotypes are the unintended but inevitable consequence of sharing social information.

Scientists say their findings appear to explain why some stereotypes have a basis in reality while others have no obvious origin.

Dr Doug Martin, who leads the University’s Person Perception Laboratory, said: “The cultural stereotype of Scottish people, for example,  includes attributes that are overrepresented among Scots, such as wearing kilts and having red hair, but also attributes that seemingly have no basis in reality, such as being miserly or dour.

“Where a genuine relationship exists between social categories and attributes, people are very good at detecting this, remembering it and then passing this information on.

“Equally, however, where there is no existing relationship between social categories and attributes, we see this association emerging spontaneously over time as the social information evolves.”

Their research investigated how social information evolves when it is repeatedly passed from person to person.

Dr Martin continued: “We found that as it is continually shared, social knowledge becomes simplified and organised categorically and, as a consequence, becomes more easily learnable.

“As it passes down a chain of individuals, social information that is initially random complex and very difficult to remember, becomes a simple system of category stereotypes that can be learned easily.

“If we are right, cultural stereotypes are the inevitable and unintentional consequence of human interaction and as a result are slowly but constantly evolving.”

Stereotypes help us make sense of the world around us, say researchers.

“While stereotypes have strong negative connotations because of their relationship with prejudice, they are also fundamental to the way we organise, store and use information about other people,” said Dr Martin.

While stereotypes have strong negative connotations because of their relationship with prejudice, they are also fundamental to the way we organise, store and use information about other people." Dr Doug Martin

“For example, if we meet a stranger, stereotypes provide us with a foundation on which we can begin to build an impression of this person and therefore guide our behaviour towards them.

“Imagine you meet someone at a party and discover they are a scientist – you automatically have instant access to the stereotype knowledge that scientists are geeky, intelligent, socially awkward and introverted. You might not believe this stereotype to be accurate and you could quickly discover that this person doesn’t possess these qualities but until that point stereotypes give you some basic information to help you understand the social situation you find yourself in.”

Dr Martin’s team came to their conclusions following innovative lab experiments where they asked people to remember information about novel ‘alien’ characters and then pass this information from person to person.

Like the game ‘Chinese Whispers’, they expected the information to change as it travelled down the chain of people.

Volunteers were asked to learn personality attributes that described the aliens, all of whom shared certain physical features such as their colour, their shape or the way they moved.

Each person was then tested to see what they could remember. Whatever information they produced was then passed on to be learned by the next volunteer and so on until a chain of information was created.

“As information is passed from person to person, what begins as a chaotic and random association of aliens and attributes becomes simpler, more structured and easier to learn,” said Dr Martin.

“By the end of the chain we have what look very much like stereotypes with physical features – such as colour – strongly associated with the possession of specific personality attributes.”

Similarly, people are more likely to mistakenly think that individuals who belong to the same social category also share the same attributes. Because we all experience the same category-based memory biases, when social information is repeatedly shared it is continually filtered as it passes from one mind to the next until eventually it becomes organised categorically and a stereotype has formed.

The scientists believe that if we can understand how cultural stereotypes form and naturally evolve then we might be able to positively influence their content in the future.

The study was funded by a grant from the Economic and Social Research Council (ESRC).