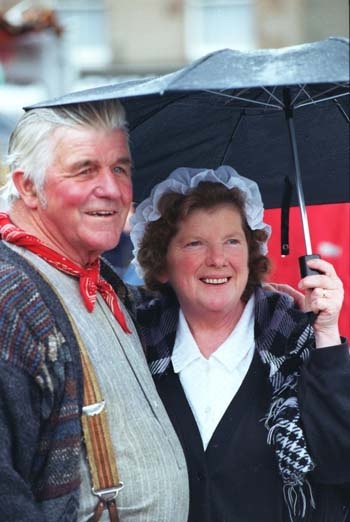 A popular festival to celebrate the singing traditions of Scotland, England, and Ireland will be held at an Aberdeenshire steading from July 25 to 27.

The weekend is designed to be informal and friendly and is a great way to hear some of the finest traditional singers from across the UK and Ireland." Emeritus Professor Ian Russell

The annual Traditional Singing Weekend at Cullerlie, now in its 14th year, is a unique celebration, bringing together outstanding traditional singers.

The event, organised by the University of Aberdeen's Elphinstone Institute and Cullerlie Farm Park, near Echt, will bring together outstanding performers for a weekend which also includes a number of workshops in traditional crafts.

The festival was created in collaboration with Tom and Anne Reid in 2000, and continues to be held in their memory. Tom (known as 'Tam') was a legendary North-East singer and was crowned the Bothy Ballad King in 1977 before a crowd of 10,000 at the Haughs in Turriff.  Anne's daughter, Tracey, and her husband, Eric Walker, currently run the farm and support the festival.

Emeritus Professor Ian Russell, from the Elphinstone Institute at the University of Aberdeen, said the festival was an opportunity for anyone with an interest in unaccompanied traditional song and crafts to hear from talented performers in a unique setting.

“We have a wonderful line-up. There will be ceilidhs featuring guest singers, singarounds for everyone who wants to join in, talks, and workshops on crafts and song, in fact, something for everyone," he added.

“The weekend is designed to be informal and friendly and is a great way to hear some of the finest traditional singers from across the UK and Ireland.

“It also continues to be a fitting opportunity to salute the memory of Tom and Anne at their steading where it all began.”

The line-up for this year includes Perthshire’s Aileen Carr, an eclectic singer with a wide repertoire of songs; John Crawford, who mainly sings Scottish traditional ballads; John Greaves, a retired farmer from the North York Moors who sings in his own dialect; Kathy Hobkirk from Ayrshire who “covers a’ things frae muckle sangs, tae Burns, tae daft wee ditties”.

Travelling from County Donegal in Ireland is Kevin Mc Gonigle who inherited his musical tradition from his family of singers from the Inishowen Peninsula; Cuthbert Noble who will bring the singing traditions of the southern Pennines of Yorkshire; and Róisín White from the Mourne Mountain area of south County Down, who will share her love for the songs of her native Ulster, and songs in the Irish language.

From nearer to home, there is Emma Spiers who was brought up listening to the traditional music of Aberdeenshire and learned songs like ‘The Back o Bennachie’, and John Valentine, from Cove near Aberdeen, who began singing whilst first-footing round Cove and at village parties.

The special ‘Homecoming’ guest is the legendary ballad singer and hand weaver Norman Kennedy, who lives in Vermont USA. Born in Aberdeen, emigrated in 1966, he learned his songs, stories and folklore from family members and neighbours in the city and close by. Having spent time in the Outer Hebrides, he speaks and also sings in Gaelic. In 2003 he was awarded the NEA (National Endowment for the Arts) National Heritage Fellowship for his work in preserving the traditions of Scottish ballads and craft weaving, the only recipient from the UK to have received this USA top honour.

In addition to traditional singing, there will also be workshops and demonstrations in traditional crafts including hand weaving, lacemaking, quilting, the making of Scottish smallpipes, and farmhouse cooking.