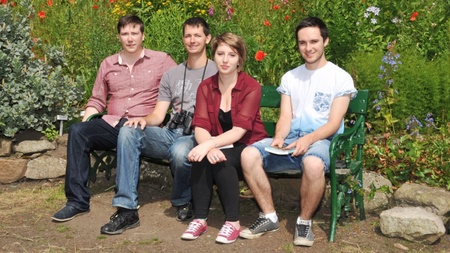 A group of University of Aberdeen students are gearing up to carry out research that could potentially save critically endangered species in the Turks and Caicos Islands.

The team of second year students, who study various disciplines within the School of Biological Sciences, will travel to East Bay Islands National Park on Monday (July 7) to carry out a thorough census of plants and animals living in the area.

With a persistent pressure to carry out commercial development in what is a popular tourist location, a detailed knowledge of rare and endangered species in the area will assist the local authority Department of Environment and Maritime Affairs in their ongoing efforts to justify the protection of the land.

Aberdeen students Tim Stephen, David Kinnear, Ailsa Sharp and Jack Walton discovered they had a shared interest in this issue and further research revealed that the last time a survey was undertaken in the park to determine the presence of rare or threatened species was in 2004.

The team then felt inspired to perform a more in-depth study and put their plan into action. With the support of DEMA, the group’s intention is to produce findings which are compatible with the previous study, while expanding on its results considerably, therefore providing the local authorities with a more up-to-date account of what is present in the park and how species distribution may have changed in the last decade.

Working closely with DEMA, who have facilitated the trip, Tim, David, Ailsa and Jack will spend seven weeks carrying out their baseline survey of East Bay Islands National Park.

Tim said: “The UK Overseas Territories represent one of the United Kingdom’s most important biodiversity assets, containing more than 300 globally threated species and accounting for an estimated 90% of the biodiversity for which the British Government is responsible. The Turks and Caicos Islands have 35 national parks and protected areas; however, limited resources have prevented thorough study and development of management plans for all protected areas, including the 3540 hectares of marine and terrestrial habitats that make up East Bay Islands National Park.

Coming from a wide range of disciplines within the School of Biological Sciences, we are well placed to carry out a much-needed in-depth study of the area which will allow us to build upon the previous research carried out." Tim Stephen

“Coming from a wide range of disciplines within the School of Biological Sciences, we are well placed to carry out a much-needed in-depth study of the area which will allow us to build upon the previous research carried out.

“Hopefully, what this expedition will allow us to do is to create an accurate and comprehensive database of the many living species that exist on the island and therefore highlight how important it is that the area continues to be protected and not developed upon, which could be disastrous for the future of biodiversity in these parts of the world.”

Dr Michelle Pinnard, Director of Teaching at the School of Biological Sciences, said: “Planning an expedition such as this one requires commitment, positivity, team work and good time management; this talented group of students have demonstrated all of those traits to reach this stage of the expedition.  Biological recording is essential to conservation efforts and it is great to see our students engaging with this important work.”

Dr Clare Trinder, a Teaching Fellow at the University’s School of Biological Sciences, added: “It’s great to see our students taking their initiative to plan an expedition like this.

“I know it’s taken a lot of work to pull everything together and it’s a real tribute to their efforts that they will soon be travelling to TCI to record and survey the rare wildlife.  All the team studied conservation biology last term so this trip will give them an amazing opportunity to build on their studies and to see at first hand some of the issues associated with conserving internationally important biodiversity.”