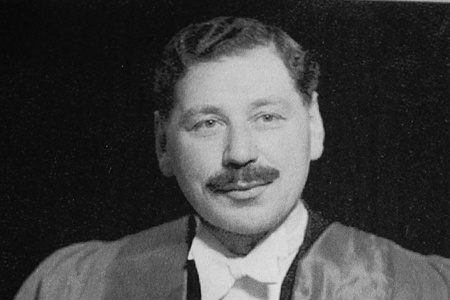 A law essay writing prize for students and alumni of the University of Aberdeen's Law School is set to return after an absence of almost two decades.

The prize is organised and administered by The TB Smith Memorial Trust, which was established by alumni “in affectionate memory” of Sir Thomas Broun Smith, sometime Chair of Scots Law at the University of Aberdeen.

The prize is open to undergraduates as well as alumni who have graduated from the University within the last five years.   Entrants must submit a 7,500 word essay on a set topic – which this year relates to the planned abolition of corroboration – by the end of September.

The essays will be judged by an independent examiner appointed by the Scottish Law Commission. The winner will receive a cash prize of £1,000, will have their work submitted to a leading journal with a view towards publication, and will also receive a winner’s reception attended by trustees and supporters of the University’s Law School.

Brian Crookshanks, one of the founding members of the Trust, commented: “TB Smith was a great character who established a very close bond with his students.  More than this, he was one of the most important legal scholars of his time.  As well as enjoying a distinguished career in his own right, he was instrumental in encouraging others to write and think about Scots law, and was heavily involved both with establishing the Stair Memorial Encyclopedia, a major reference work for Scots lawyers, and the Scottish Law Commission.”

There have been many generous supporters of the prize and I am sure they will all be pleased to see it feature in the Law School's calendar once again." Professor Margaret Ross

Greg Gordon, a Senior Lecturer in law at the University of Aberdeen, winner of the inaugural prize and now one of the Prize Fund’s Trustees, is keen to see the competition reinstated at the University.

Mr Gordon said: “I am delighted that the TB Smith Memorial Prize is back for 2014. As well as providing a fairly substantial cash prize, the competition offers a considerable degree of prestige and provides students or recent graduates with a tremendous opportunity to have their work published, which is a real honour at such an early stage in their careers.  I just hope that those who are eligible to participate will recognise what a fantastic opportunity this is, and enter the competition.”

Professor Margaret Ross, Vice Principal and Head of the College of Arts and Social Sciences and herself a trustee of the fund is thrilled that the prize is being reintroduced.

She added: “There have been many generous supporters of the prize and I am sure they will all be pleased to see it feature in the Law School’s calendar once again.”

For more information about the TB Smith Memorial Prize and details on how to enter, please visit http://www.abdn.ac.uk/law/news/6423/