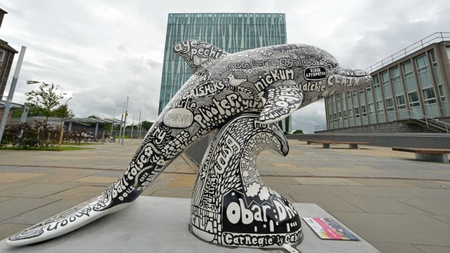 The University of Aberdeen is internationally recognised for its groundbreaking research into dolphins. But for the next 10 weeks it's going to be known for its dolphins - on and around campus.

The University has sponsored two of a pod of life-size dolphin sculptures that have temporarily set up home in Aberdeen.

The city is hosting the Wild Dolphins fundraising art project which has brought 50 spectacular sculptures of bottlenose dolphins – inspired by the real ones spotted off the North-east coast – to areas across Aberdeen.

Oceanic Dance is the name of one of the University sponsored dolphins and it can be found ‘leaping’ by the summer house in the Cruickshank Botanic Gardens. Swimmers of the World is the second sponsored sculpture and it has taken up position outside the Aquatics Centre at Aberdeen Sports Village.

The University campus is also playing host to a third dolphin which has been sponsored by Aberdeen Library Services. Doric Dolphin can be seen by the Sir Duncan Rice Library.

Wild Dolphins has been organised by the Whale and Dolphin Conservation (WDC) and the ARCHIE Foundation at the Royal Aberdeen Children’s Hospital.  When the dolphin trail comes to an end, each sculpture will be auctioned to raise funds for the ARCHIE Foundation and to support WDC’s work, protecting local wild dolphins.

Professor Liz Baggs, Head of the University’s School of Biological Sciences, is delighted that the institution is involved. She said: “We welcome the dolphins and all dolphin spotters to the University of Aberdeen.

“The charismatic nature of dolphins makes this trail ideal for fostering engagement with the wider community. Placing dolphins across our campus also reflects the breadth of our marine research and teaching. Our part of the trail is a fun way to join us in celebrating the science and the beauty of the outstanding wildlife of the North-east Scotland.”

A glimpse of a dolphin at sea always brings a smile. With the dolphin trail on campus we will get a piece of that joy every day" Diane Bruxvoort

David Beattie, Chief Executive at Aberdeen Sports Village, added: “It’s great to be involved with such an exciting and innovative project and supporting such worthwhile causes. We look forward to welcoming members of the public over the summer months as they make their way around the city’s dolphin trail.”

Diane Bruxvoort, from the Sir Duncan Rice Library, added:  “A glimpse of a dolphin at sea always brings a smile.  With the dolphin trail on campus we will get a piece of that joy every day.”

Each of the dolphins has been individually designed by Scottish artists. The three artists responsible for the fabulous sculptures at Old Aberdeen are:

Danielle Callaghan, from Edinburgh, who has designed the dolphin Oceanic Dance. She said: “My design focuses on the wonderful variety of marine life found in Aberdeen's surrounding sea, and studied at the University.  Using wave shapes in my design reflects the important presence of the sea which the city has a long relationship with. I chose a palette of oceanic blues, greens and greys to evoke a sense of Aberdeen's unique colour.”

City artist Ishy Walters designed Swimmers of the World. She said: “The buzz words for the athletes taking part in the Aquatic events at the Commonwealth Games this year are power, propulsion, precision and daring. These also capture some of the grace and fluidity of aquatic mammals - watching dolphins leaping clear of the waves, whizzing round a boat or feeding with powerful focused efficiency.”

Aberdeen’s Gabrielle Reith designed the Doric Dialect dolphin, comprised of Scots, Gaelic and Doric words drawn in an illustrative and descriptive typography. She said: “'I’ve always loved using words and pictures to communicate and inspire and feel that the dolphin project is a brilliant vehicle for my practice.”

The dolphins will be on display until late August and trail maps will be available from shops, libraries, community centres, hotels and other attractions and a smart phone app will include incentives and rewards for visitors who scan different Wild Dolphins on their phone.