Internet Enabled: But where is your personal information going?
23 June 2014 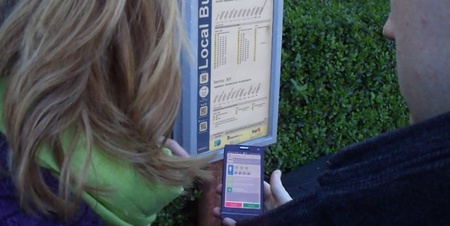 Your mobile phone, your TV, your central heating, even your fridge - these days it seems every appliance is connected to the internet. But what information are these devices gathering? Who is gathering it? And what are they going to do with it?

New software developed by the dot.rural Digital Economy Hub at the University of Aberdeen, and trialled in bus stops across the North East of Scotland, aims to answer these questions, so such services can be used with confidence.

The Trusted Tiny Things app is already operational on bus routes across Aberdeenshire and within Aberdeen, where travellers can scan NFC tags at bus stops with their mobile phones to find out timetable information.

“When a user scans the NFC tag at the bus stop with their phone, the user is taken to an app which explains which organisations are requesting information from their phone, specifically what information it will gather, and for what purpose. If the user is happy to proceed, then they are connected to the timetable information,” explains project leader Dr Edoardo Pignotti.

The project was born out of a desire to increase transparency when it comes to the data that organisations and private firms collect from members of the public through internet-enabled devices.

We don't want to stop taking advantage of new technologies, but we feel the process should be transparent, and people should be empowered so they can make an informed decision about making use of these services." Dr Edoardo Pignotti

Dr Pignotti adds: “There is an increasing amount of devices such as passive radio tags, internet connected sensor platforms and embedded computers in the home and public spaces these days and many people use them in good faith but they may be blind to what info they are giving up, and to whom. People have a right to know exactly what these devices are - what kind of data they are collecting; if the data is transmitted, and if so, who it is sent to; what the data is used for.

“We also feel that if and where possible, people should be able to opt in and out of what aspects of data they are willing to give out, so they can customise it to their own preferences.”

The app has been accessible from bus stops since April 2014, and is viewed by anyone who tries to access timetable information by scanning a tag.

A spokesperson for Aberdeenshire Council, who maintain the NFC tags at bus stops said: “NFC tags have been in use at the vast majority of bus stops in the North East of Scotland since August 2012 and we are delighted to assist the University with their research. The app is an excellent way to ensure our customers are confident that the data they are accessing is safe, especially as we will be using the NFC tags as one of the primary sources of real time bus information”.

The team are working on two other case studies. One focuses on the use of in-car ‘black boxes’ used to record information about driving style and location of the vehicle using a range of sensors including GPS and accelerometers. The information captured by the sensors is then transmitted to an insurance company typically via a 3G connection.

The other case study is based on cutting edge technology now used in children’s' toys to make them more interactive. In this case study a stuffed-toy barn owl equipped with an internal Raspberry-pi computer, 3G connectivity and a number of sensors (GPS, camera, accelerometer, microphone, humidity and temperature) is the focus.

Dr Pignotti adds: “Both these case studies raise the same questions about what information is being recorded and who is it being sent to. But with the child’s toy in particular you are talking about your child playing with a device with a camera and GPS system. Parents have a right to know if these things are recording images of their child, and if the device allows them to prevent that from happening.

“We don’t want to stop taking advantage of new technologies, but we feel the process should be transparent, and people should be empowered so they can make an informed decision about making use of these services.”

The Trusted Tiny Things project (http://t3.abdn.ac.uk/#page-nav-phonesection) was developed by scientists from the University of Aberdeen working together as part of the dot.rural RCUK Digital Economy Research Hub in collaboration with the RCUK IT as a Utility Network+ (http://www.itutility.ac.uk/). The project is part of the dot.rural Digital Economy Research Hub www.dotrural.ac.uk, based at the University of Aberdeen and funded by a five year grant (2009-2014) from the Research Councils UK Digital Economy Programme. Rural areas have specific characteristics that create challenges around issues such as quality of life and wealth creation. We believe that rural areas of the UK can, through the user-led application of digital technology, be more economically, socially and environmentally sustainable. Our aim is to harness the Hub's expertise with a range of partners to realise this ambition.