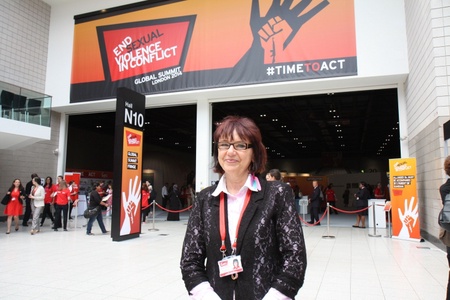 An academic from the University of Aberdeen was an invited delegate at the Global Summit to End Sexual Violence in Conflict in London last weeek.

Professor Marysia Zalewski, Head of the School of Social Sciences at the University, attended the event which was held at the ExCel Centre in London from Tuesday, June 10 to Friday, June 13.

The summit, which was hosted by Angelina Jolie, Special Envoy for the UN Commissioner for Refugees and Foreign Secretary, William Hague, welcomed representatives from 123 countries, including more than 70 ministers as well as 350 delegates from current conflict zones, video messages from Hillary Clinton and Ban Ki-moon and keynote speeches from Zainab Hawa Bangura (Special Representative of the UN Secretary General on Sexual Violence in Conflict) and from John Kerry (U.S. Secretary of State).

This event was full of inspiration and promise and, hearteningly, evidence of real political commitment to not relent or rest, but to turn commitment into concrete and effective action." Professor Marysia Zalewski

A central feature of the event was the launch of the International Protocol on the Documentation and Investigation of Sexual Violence in Conflict. The Protocol is intended to be a key tool and critical resource to help ‘shatter the culture of impunity’ around sexual violence, to more effectively help survivors and to deter people from committing such crimes in the first place.

Professor Marysia Zalewski said: “This event was full of inspiration and promise and, hearteningly, evidence of real political commitment to not relent or rest, but to turn commitment into concrete and effective action.

“That it is time to act was a clear theme of the Summit and there was certainly a strong sense of urgency about the need to translate high level political commitment into practical actions.”

As part of the Summit over 140 free events were open to the public including the Royal Court Theatre presenting the World Premiere of award-winning Liberian Girl; the Jealous Gallery and the European Premiere of Charming Baker’s sculptural work Faith’s Leap; discussion and debate, including Laura Bates from Everyday Sexism and Danai Gurira from The Walking Dead.